Magnetism is caused by electric charges in motion. Since electrons in atoms are known to move in certain ways, they are able to produce their own magnetic fields. In some types of materials, the motions of atomic electrons are easily aligned with respect to one another, causing an overall magnetic field to be produced by the material.

Follow-up question: what does the term retentivity mean, in relation to permanent magnetism? 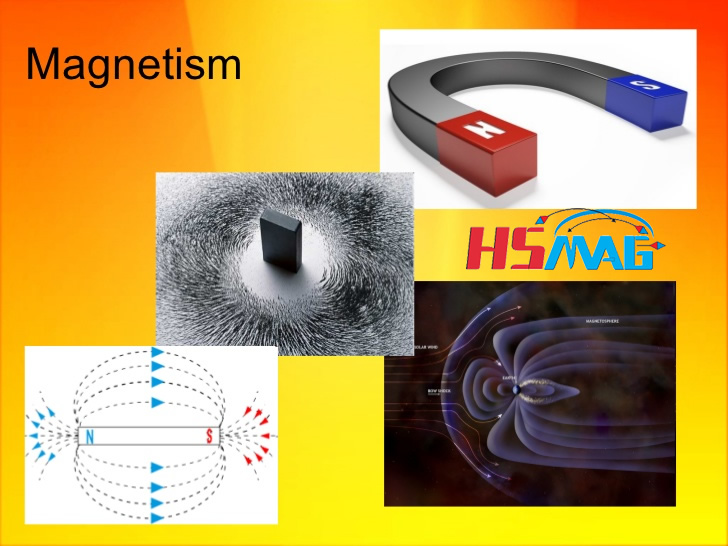 Question 2
If we were to trace the magnetic lines of flux extending from this bar magnet, what would they appear like?

Challenge question: design an experiment to reveal the patterns of magnetic flux lines in visual form.

Notes:
Experiments designed to reveal the patterns of magnetic flux lines are easy to set up. Try to have some iron filings, and some powerful bar magnets, available in your class for this purpose!

Notes:
After your students explain how to experimentally determine the poles of a magnet, challenge them with this question: given that like poles repel and opposite poles attract, what are the proper magnetic pole designations for the Earth’s actual poles? If the “north” end of a bar magnet orients itself so that it is geographically pointing north, what “magnetic polarity” does the actual North pole of the Earth have?

Question 4
Devise a method of identifying the poles of a magnet that is too large and heavy to move.

I’ll give you a hint: you could use another magnet!

Notes:
This is another question designed to provoke students to think creatively in problem-solving. They should already understand the principle of suspending a magnet and using the Earth’s natural magnetic field to identify the magnet’s poles. However, this requires allowing the magnet to freely rotate (hence the requirement of suspension) so it can act as a compass. Using the same process to identify the poles of an immovable magnet may require the use of an intermediary magnet, combined with the knowledge of magnet pole interactions (repulsion versus attraction).

Question 5
What happens to the magnetic lines of flux emanating from a magnet, when an unmagnetized piece of iron is placed near it?

Challenge question: can you think of any practical applications of this field-distortion effect?

Notes:
A previously unmagnetized piece of iron will become magnetized once exposed to the magnetic field of a nearby magnet. This fact leads to another question, namely, what magnetic pole assignments does the iron piece assume in this condition? Ask your students to identify which end of the iron becomes “North” and which end of the iron becomes “South”.
One application of magnetic field distortion is the remote detection of vehicles and other objects made of ferrous metals. There is an historical wartime application of this principle, which may prove interesting for discussion purposes!

Question 6
Describe the so-called “domain theory” of magnetism, as it applies to permanent magnets.

I’ll let you research the answer to this question!

Notes:
First, ask your students what a “permanent” magnet is. Are there other kinds of magnets? If so, what might they be called?
One of the more interesting applications of domain theory is bubble memory, a type of computer memory technology making use of localized “bubbles” of magnetism in a material corresponding to discrete magnetic domains. You might want to bring this up in discussion, if none of your students do it first.

Notes:
Ask your students to give examples of a few ferromagnetic materials. This should be quite easy.
An interesting point of trivia to bring up in discussion is that oxygen, even in its gaseous state, is paramagnetic. This principle is exploited in the design of some oxygen concentration analyzer equipment, which measure oxygen content by measuring the amount of force generated by a tiny glass container filled with a solution to be sampled!

Question 8
A mechanic visits you one day, carrying a large wrench. She says the wrench became magnetized after setting it near a large magnet. Now the wrench has become an annoyance, attracting all the other tools in her toolbox toward it. Can you think of a way to demagnetize the wrench for her?

Notes:
Students may want to test their hypotheses on magnetized paper clips, which are easy to work with and quite inexpensive. It will be interesting to see how many of your students actually researched modern de-magnetization techniques in preparation for answering this question.

Question 9
Suppose we needed to shield a sensitive electronic instrument from external magnetic fields. How would you suggest we do such a thing? How can we keep stray magnetic fields away from this instrument?

Magnetic shielding requires that the instrument be completely surrounded by a high-permeability enclosure, such that the enclosure will “conduct” any and all magnetic lines of flux away from the instrument.

Challenge question: should the enclosure material have a high retentivity, or a low retentivity? Explain your answer.

Notes:
This question provides a good review of the terms “permeability” and “retentivity”. Discuss these terms as they apply to the subject of magnetic shielding. After discussing these concepts, ask your students to give examples of suitable enclosure materials. What metals would be especially good for shielding purposes? Where did they obtain their information about magnetic shielding?

Question 10
Find a magnet and bring it with you to class for discussion. Identify as much information as you can about your magnet prior to discussion:

• Location of poles
• Which pole is North, and which pole is South
• Type (metal, ceramic, etc.)
Please be careful to keep any magnets away from cassette tapes, computer disks, credit cards (with magnetic information strips) or any other form of magnetic media!

Be prepared to explain to your classmates how you were able to determine the polarity (North and South) of your magnet!

Notes:
The purpose of this question is to get students to kinesthetically interact with the subject matter. It may seem silly to have students engage in a “show and tell” exercise, but I have found that activities such as this greatly help some students. For those learners who are kinesthetic in nature, it is a great help to actually touch real components while they’re learning about their function.
Another good learning experience with this question is how your students determined the polarity of their magnet.