First, we need to get acquainted with the various quantities associated with magnetism. There are quite a few more quantities to be dealt with in magnetic systems than for electrical systems. With electricity, the basic quantities are Voltage (E), Current (I), Resistance (R), and Power (P). The first three are related to one another by the first Ohm’s Law equation (E=IR), while Power is related to voltage and current by another (P=IE). All other Ohm’s Law equations can be derived algebraically from these two.

Magnetic Units of Measurement – With magnetism, we have the following quantities to deal with:

But wait . . . the fun is just beginning! Not only do we have more quantities to keep track of with magnetism than with electricity, but we have several different systems of unit measurement for each of these quantities. As with common quantities of length, weight, volume, and temperature, we have both English and metric systems. However, there is actually more than one metric system of units, and multiple metric systems are used in magnetic field measurements! One is called the cgs, which stands for Centimeter-Gram-Second, denoting the root measures upon which the whole system is based. The other was originally known as the mks system, which stood for Meter-Kilogram-Second, which was later revised into another system, called rmks, standing for Rationalized Meter-Kilogram-Second. This ended up being adopted as an international standard and renamed SI (Systeme International).

And yes, the µ symbol is really the same as the metric prefix “micro.” I find this especially confusing, using the exact same alphabetical character to symbolize both a specific quantity and a general metric prefix!

As you might have guessed already, the relationship between field force, field flux, and reluctance is much the same as that between the electrical quantities of electromotive force (E), current (I), and resistance (R). This provides something akin to an Ohm’s Law for magnetic circuits: 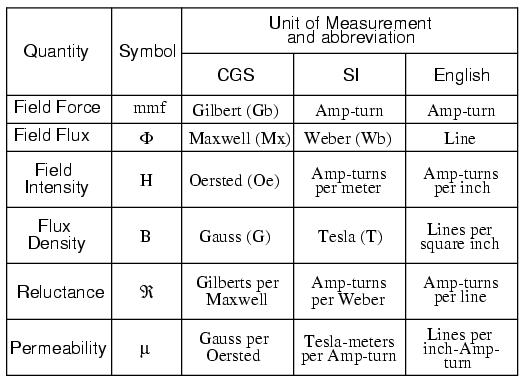 The major caveat here is that the reluctance of a material to magnetic flux actually changes with the concentration of flux going through it. This makes the “Ohm’s Law” for magnetic circuits nonlinear and far more difficult to work with than the electrical version of Ohm’s Law. It would be analogous to having a resistor that changed resistance as the current through it varied (a circuit composed of varistors instead of resistors).

Which type of weld clamp magnet should you choose ?