Magnetic Propulsion and the Final Frontier

Magnetic Propulsion and the Final Frontier 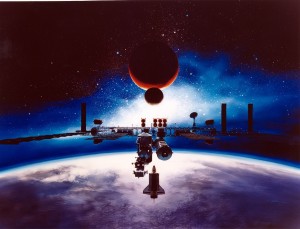 When an electromagnet is cooled to extremely low temperatures, it vibrates for a few nanoseconds after electricity is applied. This vibration, a side-effect of the electromagnet ramping up, could be used to launch a spacecraft. The supercooled, superconducting magnet vibrates 400,000 times per second when electricity is applied. If scientists can control the vibrations so they all face the same direction, it could make a highly effective propulsion system, capable of sending spacecrafts further and faster into space than current methods.

Researchers at the Johnson Space Center in Houston tested an electromagnetic (EM) propulsion drive as an alternative to the chemical propellant method currently in use. EM drives have been tested in the past, but the Johnson Space Center researchers were the first to test EM propulsion in an environment similar to space. While further experiments are required, their findings suggest that the EM drive could work.

In 2010, Professor Juan Yang determined that EM drives could be used to fuel the International Space Station (ISS), but first the drive had to be tested in space where the physics of propulsion are more complex. The NASA EagleWorks team was able to test Yang’s findings in a vacuum where conditions are similar to those in space. After experimenting with EM drives in a vacuum, the NASA team found that Yang’s research could actually work in space. EM drives can not only fuel the ISS, but also allow us to explore deeper into space and make interplanetary travel quick and easy.

Have you ever wanted to go to the moon? It’s only four hours away with help from electromagnetic propulsion.