In ferromagnetic materials, smaller groups of atoms band together into areas called domains, in which all the electrons have the same magnetic orientation. That’s why you can magnetize them. See how it works in this tutorial.

Electrons are teeny tiny magnets. They have a north and a south pole and spin around an axis. This spinning results in a very tiny but extremely significant magnetic field. Every electron has one of two possible orientations for its axis.

In most materials, the magnetic orientation of one electron cancels out the orientation of another. Iron and other ferromagnetic substances, though, are different (ferrum means iron in Latin). Their atomic makeupl leads to smaller groups of atoms banding together into areas called domains, in which all the electrons have the same magnetic orientation. Below is an interactive animation that shows you how these domains respond to an outside magnetic field. 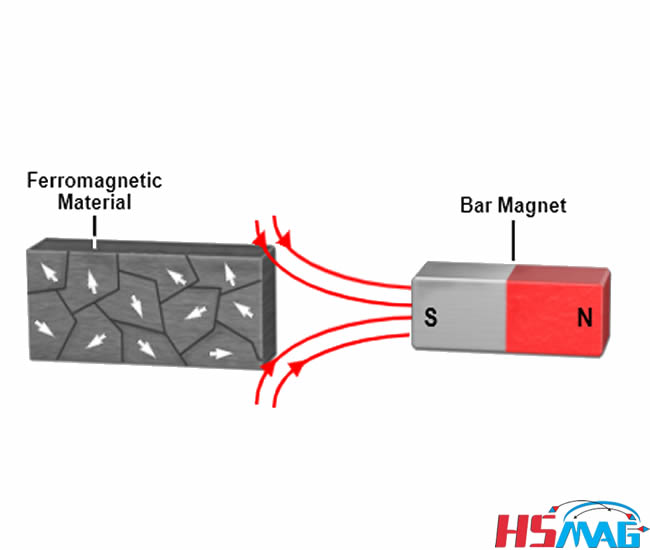 In the Ferromagnetic Material pictured above, the domains are randomly aligned (the illustration shows how this phenomenon works, not the actual size or shape of domains). Normally invisible Magnetic Field Lines, depicted in red, are seen emanating from the poles of the Bar Magnet. Use the Magnet Position slider to move the magnet closer to the ferromagnetic material so that it interacts with the field lines. As you repeat the process, you’ll notice the domains gradually aligning – with the field of the bar magnet and with each other.

Ferromagnets stay magnetized after being subjected to an external magnetic field, sometimes for millions of years. This tendency to retain magnetism is called hysteresis.