When you visit the Grindhouse Wetware website the question, “What would you like to be today?” appears in front of a background of what appears to be an electrical grid or circuit board. The biotechnology company located in Pittsburgh, PA turns its customers into cyborgs, using magnets and other electronic devices. 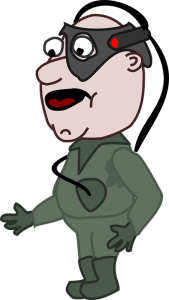 A cyborg is someone who has both organic and biomechatronic body parts. Like the Terminator or Inspector Gadget, these individuals want to be more than just human.

You may be thinking to yourself at this point why anyone would want to put magnets in their bodies, and if it’s actually safe. To answer one of those questions, it is actually safe when done by a medical professional with special magnets. The magnets on our website are designed for crafts, science projects, and home improvement projects not implantation. Implanting specially-designed magnets is actually used in the medical field already for patients with cochlear implants to improve their hearing.

Although some types of magnets are used in the medical field, the implanted magnets from businesses like Grindhouse Wetware are not approved by any medical authority, and no licensed doctor will perform the surgery for you. That’s where the “Grinders” come in, or the unlicensed person who will implant you. The actual implantation is not legal in all states, and for some, just having a magnet is not enough.

The purpose of the magnets is to give you a sixth sense, letting you feel the electromagnetic force going through your body. They can be used to pick up small things like paperclips or small silverware. Another way they are being used is through Grindhouse Wetware’s Bottlenoose vol. 0.1 implant. The device interacts with the magnet, collecting data such as sonar, UV, Wi-Fi, or thermal information and translates it to a magnetic field via induction.

Magnets aren’t the only thing that these cyborgs are putting into their body though. As you scroll down the page you’ll notice their other procedures, such as the Circadia. This device is implanted into the bottom of your forearm and reads biomedical data and then via Wifi sends the results to you. Instead of taking trips to the doctor, you simply just check your arm and interpret the data yourself.

Although still illegal, the community of implanted cyborgs is growing , and some estimate that there could be as many as 10,000 of them world-wide. The main risks of getting a magnetic implant is the body’s rejection. Just like some piercings or a splinter, your body will naturally push the foreign object to the skin’s surface to reject it. What do you think about becoming a cyborg? Should we have better regulations so that people like those at Grindhouse Wetware can operate on a more legal and safer scale?