Magnetic chucks are primarily designed for holding ferro-metallic work pieces. They consist of an accurately centered permanent magnet face. Fixed ferrous plates or pole pieces, contained within a housing are brought into contact with electromagnets or permanent magnets. These pole pieces are usually flush with the housing surface. The part or work piece to be held forms the closing of the magnetic loop or path, onto those fixed plates, providing a secure anchor for the work piece.

Buying Tips
For thin workpieces narrow pole pitch is better.
Wider pole pitch is better for thicker parts.
For mold makers general purpose chucks can be the best choice to manage highest percentage of work.
Before buying buyers must take note of the thickness in relation to the space between the two poles. As the spacing determines how much of the workpiece become magnetic. 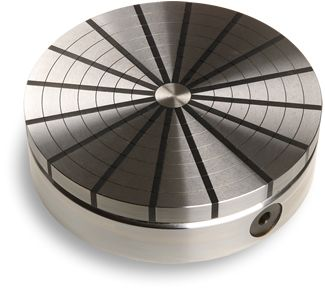 Types
On the basis of applications, configuration and shapes magnetic chucks are of following types:

Rotary Magnetic Chucks
Rotary chucks are constructed with poles running off the edge. They operate in the same way as the rectangular chucks do. The top plates are constructed out of brazing magnetic steel and nonmagnetic stainless steel. Dowel pins or screws may be inserted in the top plate to withstand the high torque of used on lathes, grinders and other machinery with heavy lathe cuts. Chuck top plates may be machined for work with odd configurations or an auxiliary plate may be added and removed for other work, leaving the original plate intact.

Pole Chucks
Pole chuck are of two types- Transverse pole chuck and Longitudinal pole chuck. In transverse pole chuck the poles run across the chuck from side to side. The pole spacing varies from chuck to chuck. That is, it is minimum in small chuck and maximum in big chucks.
In longitudinal pole chuck the poles run the length of the chuck from end to end. Top plates on both chucks are furnace brazed, making the magnetic and nonmagnetic steel into one solid, water tight unit.

Permanent Magnetic Chucks
High powered ceramic magnets are used for making standard pole permanent magnetic chucks. The magnetic and non magnetic stainless steel are furnace brazed, making a solid, one piece construction. The magnets can be drilled to a required depth. It is between the poles or anywhere in the top that drilling or machining is done. At the top plates there are no magnets. Handles on all permanent magnetic chucks are removable.

Circular Magnetic Chucks
Circular magnetic chucks consist of ceramic magnets for maximum workholding and easy release. Normally the units are made up of brass and steel top plates. There is a concentric ring that gives maximum resistance to coolant and accuracy in centering the work pieces on the chuck. The chucks also consist of removable handles. Circular magnetic chucks are available in both standard pole and fine configuration.