Magnetic alloys are alloys engineered to have special magnetic properties.

Permalloy is the term for a nickel iron magnetic alloy. Generically, it refers to an alloy with about 20% iron and 80% nickel content. Permalloy has a high magnetic permeability, low coercivity, near zero magnetostriction, and significant anisotropic magnetoresistance. The low magnetostriction is critical for industrial applications, where variable stresses in thin films would otherwise cause a ruinously large variation in magnetic properties. Permalloy’s electrical resistivity generally varies within the range of 5% depending on the strength and the direction of an applied magnetic field.

The right conditions for transmitting signals through cables without distortion were first worked out mathematically by Oliver Heaviside. After a prolonged search, Permalloy was discovered in 1914 by Gustav Elmen of Bell Laboratories, who found it had higher permeability than silicon steel. Later, in 1923, he found its permeability could be greatly enhanced by heat treatment. Other compositions of Permalloy are available, designated by a numerical prefix denoting the percentage of nickel in the alloy, for example 45 Permalloy containing 45% nickel, and 55% iron. Molybdenum Permalloy is an alloy of 81% nickel, 17% iron and 2% molybdenum. The latter was invented at Bell Labs in 1940. At the time, when used in long distance copper telephone lines, it allowed a tenfold increase in maximum line working speed. 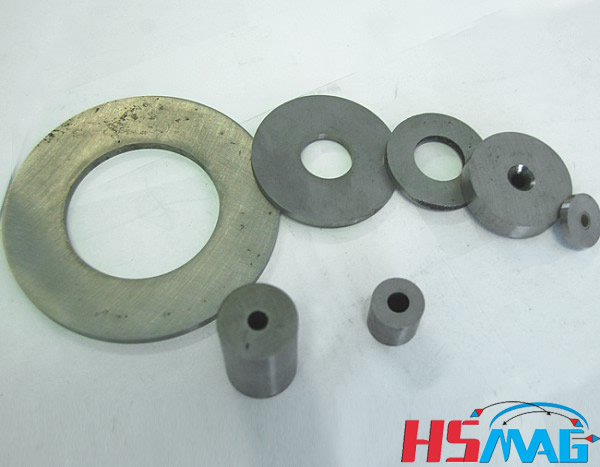 It is a magnetically soft material. The resistivity of the alloy is 6 nΩ·cm2/cm. It has a high magnetic permeability and a low coercivity. Supermalloy is used in manufacturing of components of radio engineering, telephony, and telemechanics instruments.

Mu-metal is a nickel-iron alloy (75% nickel, 15% iron, plus copper and molybdenum) that has very high magnetic permeability. Permeability is represented by μ.

The high permeability makes mu-metal very effective at screening static or low-frequency magnetic fields, which cannot be attenuated by other methods.

Mu metal requires special heat treatment — annealing in hydrogen atmosphere, which reportedly increases the magnetic permeability about 40 times. The annealing alters the material’s crystal structure, aligning the grains and removing some impurities, especially carbon. Mechanical treatment may disrupt the material’s grain alignment, leading to drop of permeability in the affected areas, which can be restored by repeating of the hydrogen annealing step.

Mu-metal is used to shield equipment from magnetic fields. For example:

Cathode-ray tubes used in analog oscilloscopes
Superconducting circuits and esp. Josephson junction circuits
Electric power transformers, which are built with mu-metal shells to prevent them from affecting nearby circuitry
Magnetic cartridges, which have a mu-metal case to reduce interference when LPs are played back
Hard Drives, which have mu-metal backings to the magnets found in the drive
Other materials with similar magnetic properties are supermalloy, supermumetal, nilomag, sanbold, Molybdenum Permalloy, Ultraperm, M-1040, etc.

A Heusler alloy is a ferromagnetic metal alloy based on a Heusler phase. Heusler phases are intermetallics with particular composition and fcc crystal structure. They are ferromagnetic even though the constituting elements are not as a result of the double-exchange mechanism between neighboring magnetic ions, usually manganese which sit at the body centers in a Heusler alloy. The magnetic moment usually resides almost solely on the manganese atom in these alloys.

The term is named after a German mining engineer and chemist Friedrich Heusler, who studied such an alloy in 1903. It contained two parts copper, one part manganese, and one part tin. The Heusler alloy Cu2MnAl has been the subject of a considerable number of studies and the stoichiometric alloy (i.e. one in which the proportion of elements is exactly as in the formula above) has the following properties. It has a room temperature saturation induction of around 8,000 gauss (Bouchard 1970) which is in excess of that of the element nickel (around 6100 gauss) although less than that of iron (around 21500 gauss). Early studies (Heusler 1903, Knowlton and Clifford 1912, review Bozorth 1951) showed that the magnetic properties varied considerably with heat treatment and composition. Bradley and Rogers (1934) first showed that the room-temperature ferromagnetic phase was a fully ordered structure of the L21 type. This has a primitive cubic lattice of copper atoms which has alternate cells body-centred by manganese and aluminium . The lattice parameter is 5.95 angstrom units. The molten alloy has a solidus temperature around 910oC. As it is cooled below this temperature the fully disordered solid body-centred cubic beta phase forms. Below 750oC a B2 ordered lattice forms (Nesterenko 1969, Bouchard 1970) with a primitive cubic copper lattice body-centred by a disordered manganese aluminium sublattice. Cooling below 610oC causes further ordering of the manganese and aluminium sub-lattice to the L21 form (Bouchard 1970, Ohoyama et al 1968). Studies of off-stoichiometric alloys have been made by West and Lloyd-Thomas (1956), Johnston and Hall (1968) and Bouchard (1970). In general the ordering temperatures decrease for these compositions and the range of temperatures within which the alloy can be annealed without forming microprecipitates becomes small.

Oxley et al (1963) found a value of 357oC for the Curie temperature, below which the alloy becomes ferromagnetic. A variety of investigators using neutron diffraction and other techniques (e.g. Endo et al 1963, Bouchard 1970) have shown that a magnetic moment of around 3.7 bohr magnetons resides almost solely on the manganese atoms. As these atoms are 4.2 Angstrom units apart, it seems likely that the exchange interaction aligning the spins must be indirect through conduction electrons or the aluminium and copper atoms. Theoretical studies of the interaction have been made by Oxley et al (1963) and Geldart and Ganguly (1970).

Electron microscope studies (Nesterenko 1969, Bouchard 1970) have shown that thermal antiphase boundaries (APBs) form during cooling through the ordering temperatures as ordered domains nucleate at different centres within the crystal lattice and are often out of step with each other where they meet. The anti-phase domains grow as the alloy is annealed. There are two types of APB corresponding to the B2 and L21 types of ordering. APBs also form between dislocations if the alloy is deformed. At the APB the manganese atoms will be closer than in the bulk of the alloy and electron microscope studies (Lapworth and Jakubovics 1974) showed that for non-stoichiometric alloys with an excess of copper (e.g. Cu2.2MnAl0.8) an antiferromagnetic layer forms on every thermal APB. These antiferromagnetic layers completely supersede the normal magnetic domain structure and stay with the APBs if they are grown by annealing the alloy. This significantly modifies the magnetic properties of the non-stoichiometric alloy relative to the stoichiometric alloy which has a normal domain structure. Presumably this phenomenon is related to the fact that pure manganese is an antiferromagnet although it is not clear why the effect is not observed in the stoichiometric alloy. Similar effects occur at APBs in the ferromagnetic alloy MnAl at its stoichiometric composition.

In recent time, the importance of Heusler alloys for spintronics has been increasing.

Another useful Heusler alloy is the class of materials known as ferromagnetic shape memory alloys which can change their length by up to 10% on application of a magnetic field. These are generally an alloy of nickel-manganese-gallium.

Fernico is an alloy of Iron (Fer), Nickel (Ni) and Cobalt (Co). The abbreviations form the name which was a trademark. The alloy has the same linear coefficient of expansion of certain types of glass, and thus makes an ideal material for the lead out wires in light bulbs and thermionic valves.

Cunife is an alloy of copper (Cu), nickel (Ni), iron (Fe), and in some cases cobalt (Co). The alloy has the same linear coefficient of expansion of certain types of glass, and thus makes an ideal material for the lead out wires in light bulbs and thermionic valves. It is magnetic and can be used for making magnets.

Alcomax is a magnetic material consisting of an alloy of iron, nickel, aluminium, cobalt and copper. It is manufactured by traditional foundry casting or sintering techniques and was developed in the 1930s. Its principal applications are for triggering of proximity switches such as reeds and hall sensors. Other applications include, instrumentation, high temperature ‘pot’, holding magnets, horseshoe designs for lifting, entry door locks, NDT, magnetic fluid seals, and ferrous separation including sump plugs.

This material offers the best temperature coefficient (0.02% per degree Celsius) of all permanent magnets, thus making it an ideal choice when a constant field over a wide (-270 °C to +500 °C) temperature range is required.

The high nickel content results in good stability against corrosion and oxidation, this metallic composition is also a good electrical conductor, however being coarse-grained, hard and brittle, they can not be drilled or conventionally machined and should not be used as a structural component.

Alcomax is a low coercive force material and where possible should be magnetised after assembly. Its performance can be easily reduced by poor handling or exposure to other magnetic fields. Again, because of low coercivity to reach optimum performance, rod magnets should have a magnetic length of approximately five times the diameter when used in open circuit applications. For example, a rod magnet of 5 mm diameter should be 25 mm magnetic length.
Because of the cobalt content within the magnet composition Alcomax magnets are not low-cost solutions.