It is transportation that is the direct product of the social link and social relationship of the people. Revolutionary changes have taken place in the life of the mankind since human beings acquired the capability of walking upright as a result of evolution from the ape. Human being’s vision was widened to enable itself to better observe the surroundings and to be watchful against any possible crises. But due to the low productive forces and constraints on people by the conditions of the nature in the primitive times, usually they could not but live by hunting animals or gathering plants within a certain region to maintain the lease of life by making use of a few elements of the nature, let alone any act of transport for the commercial intercourse among the peasants, workers and merchants.

Nevertheless, with the development of human society, people gradually widened their vision in the geographic space through several forms of lateral social contact in their production activities and injected active seeking factor into the passive man, environment relationship.

Gradually, human being mastered the use of tools and other special at his service. Among others, the horse, an animal which changed the speed of human transportation, enabled a cart to run at some 10km/h, thus the region scoped varied and the link between city and city became closer, enhancing the progress of culture and civilization in various places.

The British Industrial Revolution shook the transportation modes left over in thousands of years. The advent of automotive and train realized the revolution of power and the engine enabled vehicles to substantially increase their speed. From then on, speed was associated with energy and efficiency. Nowadays, a car usually runs at 80 to 100km/h. Train has evolved from a very slow, heavy iron “thing” into a sort of popular surface transportation means, which can attain a speed of 150 to 200km/h.

Speed is a target the mankind is eternally seeking.

At present, high speed rail is in common use in Europe as well as in Japan. Its max speed exceeds 200km/h,thus pulling cities, even countries still closer and vigorously promoting information exchanges and talent folw.

One of the characteristics of the society created by modern science and technology is the large volume of information and the wide high speed transmission of information. A wholly new concept of region and speed has been formed in the minds of people and it has become a global culture, which is more and more unchangeable.

With such an aspiration of the mankind’s for high speed transportation, maglev technology was born at the right moment. In the labs of many countries, scientists and engineers were striving to put the product which integrated traditional electromechanical components with modern control technology into commercial application.

Electromagnetic levitation: controllable electromagnetic field is generated by exciting the on-board levitation magnets and the magnets and stator packs of long stator linear motor along the guideway attract each other, thus pulling the train upward and a stable levitation gap being guaranteed by controlling the levitation excitation current. Levitation gap between magnets and guideway is normally controlled to the range between 8 and 12mm.
High-speed maglev system consists of four major components, i.e. guideway, vehicle, power supply and operation control system.

Power supply: The power supply system includes substations, trackside feeder cables, switch stations and other power supply equipment. Power supply system feeds the train with the power required for the train operation by energizing the long stator windings on the guideway. First, high voltage alternating current is taken from the 110KV public power grid, stepped down to 20KV and 1.5KV via step-down transformer, then converted into direct current via rectifier, then converted back to variable frequency a c current between 0 and 300Hz via rectifier. After step-up, the current will be fed to longstator winding on the guideway via guideway cables and switch stations, generating propulsion force between the stator and on-board magnets. The rectification equipment, conversion equipment and motor stators etc. of the maglev system are all installed on the ground. No strict requirements for the volume, weight, and anti-vibration of the equipment are available. 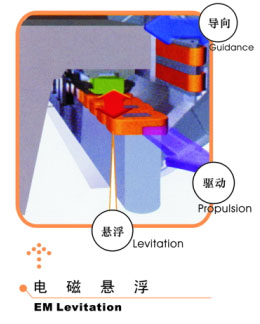 The Germans’ researches of maglev transportation in the real sense began in 1968. Before then, no systematic research had been carried out because the level of technical and technological conditions remained rather low which limited its development to a large extent.

From 1968 on, Germany was in urgent need of developing new high speed transportation systems due to environment and energy problems.

In 1969, the Federal Ministry of Transport, DB AG and industry of Germany launched H S R (high performance, high speed rail) study in which HS maglev line was involved. The German Industry began the development of maglev transport on this basis, aided finan cially by the Federal Government.

At the initial stage, equal stress was laid on the research of both normal conducting superconducting maglev technology.

In 1971, the test run of the first principle vehicle in Germany was conducted on a 660m tral track. The vehicle was propelled by the short stator linear motor mounted on the sides of the vehicle.

In 1975, a maglev vehicle propelled by synchronous long stator linear motor on the guideway side was tested at the NMB1 Test line at Thyssen Henschel in Kassle.

In 1977, after systematic analysis, the Federal Ministry of Research and Technology (BMFT) decided in favor of the concentrated development of the transport system propelled by longstator linear motor using normal conducting magnets, considering the technical level required for super conducting maglev rail was too high and it was difficult to make adequate progress in a short period of time.

In 1978, the German Government decided to build a transrapid test track in Emsland.

In 1979, at the International Transportation Exhibition (IVA 79) in Hamburg, a 900m long TR demonstration route was displayed. It was not until then that people began to come in contact with and be concerned with maglev train in real sense. Hamburg residents showed great interest in the vehicle which can run at a speed of 75km/h. The successful display of the maglev vehicle at the Exhibition gave a great impetus to the development course of the high speed transrapid. Moreover it helped to bring about Germans’ decision to construct a large-size transrapid test facility.

In 1980, the construction of the Transrapid Test Facility started in Emsland. To build its first portion, the German Industry formed “Magnetbahn Transrapid” Consortium. Project phase I consists of a 21.5km-long test guideway, test center and the Experimental Vehicle TR 06. Test run of unmanned vehicle began on that portion of guideway in 1982. The portion was put into trial operation on June 30, 1983. At the end of the same year, the vehicle attained the speed of 300km/h. To increase the test speed, it was decided in 1984 to extend the southern loop. The construction of the southern loop was completed in 1987. The total length of TVE guideway reached 31.5km and speed increased to 400km/h.

Prior to December, 1991, the Deutsche Bundesbahn in cooperation with renowned universities set up an expert team under the leadership of DBA. The expert team, having made a comprehensive inspection and appraisal of the highspeed Maglev Transrapid, came to the conclusion that “the technology had been fally mature for application”. Thus Transrapid became the world’s first superspeed maglev system with technical readiness for application.

May 9/June 14, 1996 the Federal Parliament passed the “Transrapid Requirement Law”.

In April, 1997, Germany decided to build 292km-long Transrapid route Berlin Hamburg. It had been planned to start the construction in the second half of the yaer 1998 and to be put into commercial operation in 2005. TR 08 vehicle had been developed specially for use in that line. The vehicle was tested at TVE in October 1999. However, the construction plan had to be cancelled in February, 2000 because new forecast indicated that the construction of the new route might encounter the risk of suffering lossesl

In June, 2000, the city of Shanghai and Transrapid International agreed to jointly carry out a feasibility study on highspeed Transrapid demonstration line in China. In December, China decided to build a highspeed transrapid demonstration line in Shanghai from Metro Longyang Road station to Pudong International Airport. The construction began in March 2001.

On December 31, 2002, the Shanghai Maglev Line, after more than two years of designing, construction and commissioning by the experts of China and Germany, eventually came into view in the world. The Chinese Prime Minister Zhu Rongji and German Chancellor Gerhard Schroeder were among the first guests in her maiden trip. On board the world’s sole commercially-operated maglev train and looking through the windows at the road vehicles lagging far behind, they enjoyed the pleasure to them by the speed of 430km/h and nodded with smile.

Development of Maglev Transport in Other Countries

Progress of world interest have been made in Maglev transport not merely in Germany and Japan. Since the seventies of the 20 century, developed countries like Japan, USA, Canada, France, UK etc have in succession carried out development of maglev transport system.

In UK there used to be a maglev line linking Birmingham Airport with International Railway station, 600m long. It need only 90 seconds to bring the passengers to their destinations. Though that maglev line was no longer in service, its maglev impact wares serged was no doubt heartshaking.

In 1972, for the first time, the test run of a superconducting maglev vehicle 2.2 ton in Weight succeeded on the 480m long test track and attained the speed of 60km/h.

In December,1977, vehicle attained the max speed of 204km/h on the Miyazaki Maglev Test Track.

In December 1979, the speed in the unmanned vehicle run was raised to 517km/h.

In November 1982, the test of manned maglev train succeeded.

Test runs are now underway in Japan. So are the researches on the improvement of aerodynamics, reduction of noise and cost decrease. Commercial application is planned to the place in 2004.

So many countries in the world have been involved in the researches of the maglev technology, but only in Shanghai a real maglev operation line was successfully built. The success again proves that the maglev technology is safe, economic and advanced .Surely the economic benefit and political effect brought can not be overestimated.