A majority of automated systems using linear motors today rely on a rotary servo motor coupled to a ball screw, belt-drive, rack-and-pinion, or even a cam-follower mechanism which convert the rotary motion of the motor to its linear translation. Increased demand for higher throughput, a need for millions of operating cycles, and increased positioning accuracy requirements, however, have exposed shortcomings in these traditional linear motion systems.

Design Advantages
The advantages of a direct drive linear motor are inherent to its design. A linear motor is essentially a rotary servo motor cut open and unrolled. It consists of two main elements: the forcer and the magnetic way.

he forcer is usually the moving member and is comprised of coil windings encapsulated in a thermally conductive resin body. The magnetic way is typically stationary and consists of rare earth magnets placed on a steel carrier plate.

The same basic technology used to produce torque in a rotary motor produces force in a linear motor. Thrust is generated by the interaction of the forcer’s electrically energized windings and the magnetic field generated by the magnetic way. The forcer’s direct connection to the payload increases system stiffness and eliminates any potential compliance, backlash and friction issues associated with ball screw, rack-and-pinion, belt-driven and cam-follower systems. This increased stiffness in a linear motor system allows for an improved level of dynamic response.

A typical ball screw drive system with reasonable design parameters has a maximum dynamic bandwidth of 5 to 15 Hz. This means that an unloaded ball screw can reverse its rotation up to five to 15 times per second in a controlled manner.

The limited bandwidth is a result of the relatively low torsional rigidity of the screw shaft and ball nut, as well as the rotary motor’s inertia combined with the inertia of the screw shaft. Furthermore, the linear stiffness of a ball screw is not constant and is dependent on the position of the ball nut, further minimizing controllability in dynamic applications.

In contrast, a typical linear motor has a bandwidth of 40 Hz or more. This superior dynamic response is largely due to the lack of conversion mechanisms and the linear nature of the motor’s forcer. The increased bandwidth allows for faster machine cycle times and increased throughput. The linear motor’s mechanical time constant is also much smaller than a ball screw system, contributing to its dynamic response. 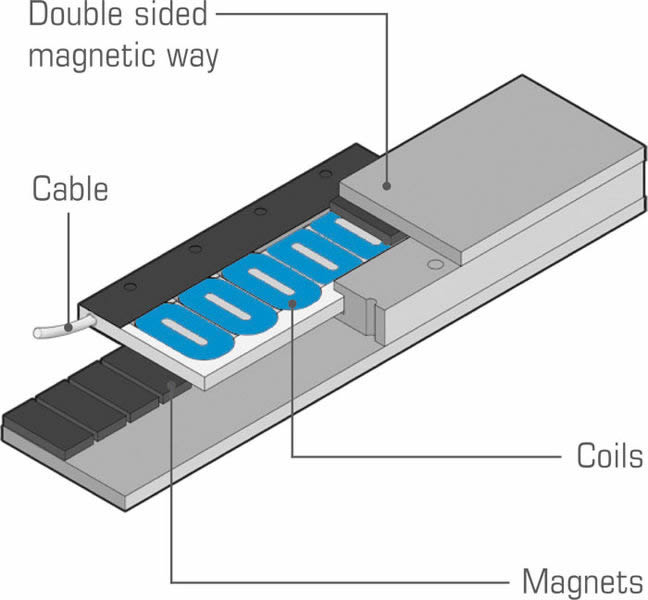 Precision Comparisons
With all linear motors, position feedback is provided directly at the forcer, supplying an accurate reading of the position of the load. Unless a secondary linear feedback device is added, rotary motors rely on a rotary encoder coupled directly to the motor. The rotary encoder cannot account for any backlash or lost motion in the conversion mechanism, so the true position of the load is not known.

Although backlash in ball screws can be minimized by preloading the ball nut, this adds to friction and wear. Backlash in a rack-and-pinion system can be eliminated, but only with costly electronic preloading. On the other hand, linear motor systems can achieve a high level of absolute positioning accuracy and positioning repeatability, limited only by the resolution and accuracy of the linear encoder.

It is principally for this reason that laser cutting and laser scribing machines benefit from linear motor characteristics such as positioning accuracy, smooth travel and virtually limitless travel length. With ball screws, limited travel length can be an issue, depending on the application. Ball screws are supported at the ends, and as the unsupported length increases with longer travel lengths, screw sag becomes an issue that can affect performance and speed.

Belt-driven and rack-and-pinion systems can provide long travel lengths, but not necessarily the precision and accuracy required. A linear motor provides submicron repeatability and accuracy, and its non-contact operation makes it friction-free.

A motor’s maximum acceleration is inversely proportional to the moving mass or rotating inertia. The rotary-to-linear conversion mechanisms found in traditional servo linear motion systems add inertia. Linear motors don’t have to contend with this inertia, and a typical linear motor design has relatively low mass compared to its rotary counterpart. These characteristics allow linear motors to achieve up to 20 Gs of acceleration and 5 m/s maximum velocity. 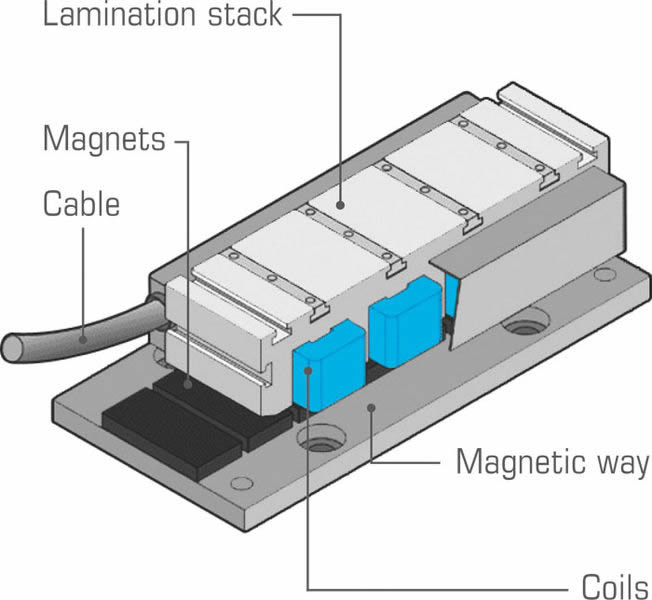 Flexibility Considerations
Another advantage of linear motors is increased flexibility in machine design. With a linear motor, multiple carriages can be run independently on a single track sharing the same support members, linear bearing rails and linear encoder scale – thereby guaranteeing parallelism between moving forcers while minimizing space requirements. Multiple forcers can also be joined for applications requiring larger thrust forces than can be provided by a single forcer.

An example of the increased flexibility in machine design offered by linear motors can be illustrated in an application example where a rotary cam is replaced by a linear motor. Rotary cams convert rotary to linear motion by means of a cam and a follower or a linkage system. In this example, machine flexibility is increased by replacing multiple cams driven from one drive shaft with independent linear axes. Each axis can now run independently with separate move profiles, allowing the machine to produce a wider range of products.

Application Design and Cost Issues
Of course, not all applications can benefit from linear motors – and cost is one of the main factors. While the total life cycle cost of a linear motor system can be low compared to a rotary servo motor and linear translation motion system, many designers are reluctant to make the higher initial investment.

Another issue with linear motors is that their higher acceleration rates can cause disturbances unless sufficient stiffness is designed into the machine frame. Although every motor produces heat, a linear motor’s direct connection to the load can be a disadvantage when it comes to providing thermal dissipation as heat is transferred directly to the load. Heat-sensitive applications will require external air or liquid cooling, or the linear motor can be oversized to minimize the temperature rise in the motor coil.

Other linear motor design considerations include magnetic attraction forces between the motor coil and magnet track. A strong magnetic attraction force exists between iron-core linear motors and magnet tracks, typically in the range of two to four times peak force. This magnetic force must be accounted for in the selection of the linear bearings; however, it is important to note that this magnetic preload can also help in increasing the system’s frequency response and improving deceleration and settling times.

Designers should also be aware that exposed linear magnets can attract ferrous particulates, and therefore can present safety concerns associated with magnetic forces (for example, if the machine operator has an electronic pacemaker). For these reasons, magnetic shielding or protective covers must be designed into the system.

Cable management is another issue of concern for systems designers. In most linear motors, especially those with long travel lengths, the forcer moves while the magnets are stationary. A moving cable management system is therefore required, and it must be designed to prevent premature failure of the power and encoder cables. This means using cable carriers with an adequate bend radius and high flexing cables. For short travels, it may be possible to fix the coil and move the magnet track, thereby removing the need for any cable management.