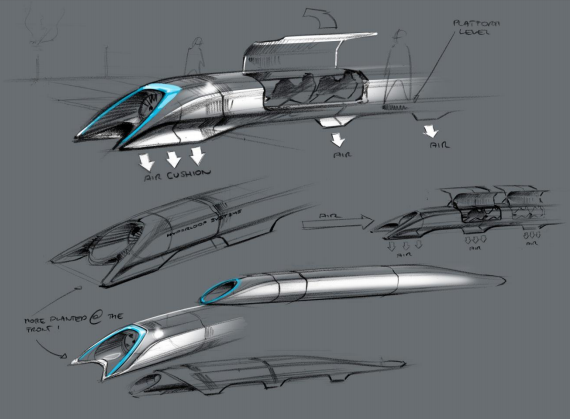 When the California “high speed” rail was approved, I was quite disappointed, as I know many others were too. How could it be that the home of Silicon Valley and JPL – doing incredible things like indexing all the world’s knowledge and putting rovers on Mars – would build a bullet train that is both one of the most expensive per mile and one of the slowest in the world? Note, I am hedging my statement slightly by saying “one of”. The head of the California high speed rail project called me to complain that it wasn’t the very slowest bullet train nor the very most expensive per mile.

The underlying motive for a statewide mass transit system is a good one. It would be great to have an alternative to flying or driving, but obviously only if it is actually better than flying or driving. The train in question would be both slower, more expensive to operate (if unsubsidized) and less safe by two orders of magnitude than flying, so why would anyone use it?

If we are to make a massive investment in a new transportation system, then the return should by rights be equally massive. Compared to the alternatives, it should ideally be:

• Not disruptive to those along the route

Is there truly a new mode of transport – a fifth mode after planes, trains, cars and boats – that meets those criteria and is practical to implement?  Many ideas for a system with most of those properties have been proposed and should be acknowledged, reaching as far back as Robert Goddard’s to proposals in recent decades by the Rand Corporation and ET3.

Unfortunately, none of these have panned out. As things stand today, there is not even a short distance demonstration system operating in test pilot mode anywhere in the world, let alone something that is robust enough for public transit. They all possess, it would seem, one or more fatal flaws that prevent them from coming to fruition.

The Hyperloop (or something similar) is, in my opinion, the right solution for the specific case of high traffic city pairs that are less than about 1500 km or 900 miles apart. Around that inflection point, I suspect that supersonic air travel ends up being faster and cheaper. With a high enough altitude and the right geometry, the sonic boom noise on the ground would be no louder than current airliners, so that isn’t a showstopper. Also, a quiet supersonic plane immediately solves every long distance city pair without the need for a vast new worldwide infrastructure.

However, for a sub several hundred mile journey, having a supersonic plane is rather pointless, as you would spend almost all your time slowly ascending and descending and very little time at cruise speed. In order to go fast, you need to be at high altitude where the air density drops exponentially, as air at sea level becomes as thick as molasses (not literally, but you get the picture) as you approach sonic velocity.

So What is Hyperloop Anyway?

Short of figuring out real teleportation, which would of course be awesome (someone please do this), the only option for super fast travel is to build a tube over or under the ground that contains a special environment. This is where things get tricky.

At one extreme of the potential solutions is some enlarged version of the old pneumatic tubes used to send mail and packages within and between buildings. You could, in principle, use very powerful fans to push air at high speed through a tube and propel people-sized pods all the way from LA to San Francisco. However, the friction of a 350 mile long column of air moving at anywhere near sonic velocity against the inside of the tube is so stupendously high that this is impossible for all practical purposes.

Another extreme is the approach, advocated by Rand and ET3, of drawing a hard or near hard vacuum in the tube and then using an electromagnetic suspension. The problem with this approach is that it is incredibly hard to maintain a near vacuum in a room, let alone 700 miles (round trip) of large tube with dozens of station gateways and thousands of pods entering and exiting every day. All it takes is one leaky seal or a small crack somewhere in the hundreds of miles of tube and the whole system stops working.

However, a low pressure (vs. almost no pressure) system set to a level where standard commercial pumps could easily overcome an air leak and the transport pods could handle variable air density would be inherently robust. Unfortunately, this means that there is a non-trivial amount of air in the tube and leads us straight into another problem.