While we often talk about the importance of keeping contamination out of linear motion components such as linear guides and screws, when these systems are used in a cleanroom, the goal is just the opposite — to keep these components from introducing contamination into the environment.

What exactly is a cleanroom?

According to ISO 14644-1:2015, “Cleanrooms and associated controlled environments provide for the control of contamination of air and, if appropriate, surfaces, to levels appropriate for accomplishing contamination-sensitive activities.”

Cleanrooms are most commonly associated with applications in the semiconductor, electronics, and medical device industries, although other industries — such as aerospace, pharmaceuticals, and food and beverage — also use cleanroom environments in some applications.

The ISO 14644-1 standard rates the level of “cleanliness” of a cleanroom on a scale from 1 (best) to 9 (worst), based on the number of particles — broken down into six size ranges — that are present in a cubic meter of air.

Notice that the cleanroom standard referenced above is from the International Standards Organization (ISO). You may also see the U.S. Federal Standard 209E referenced in some instances, despite the fact that it was revoked in 2001. The FS 209E ratings can be cross-referenced to ISO ratings, but note that the class numbers don’t align. For example, a cleanroom rated as class 1 under FS 209E is rated as class 3 under ISO 14644-1.

Friction is the enemy of a cleanroom

The overarching goal when using a linear motion system in a cleanroom application is to keep its particle generation to a minimum. But linear motion components rely on sliding or rolling motions, which necessarily produce particles due to friction and wear between surfaces. So one of the main areas of focus should be to reduce friction as much as possible.

However, the standard, full-contact seals on linear ball bearings and ball screws experience sliding contact with the guide rail or screw shaft, so low-friction or non-contact seals are preferred over full-contact designs. And recently, some manufacturers have conducted particle-count tests that demonstrate how ball spacers, or ball chains — which separate the balls and prevent them from colliding with each other as they recirculate through the bearing — can reduce particle generation in profiled rail guides and ball screws. 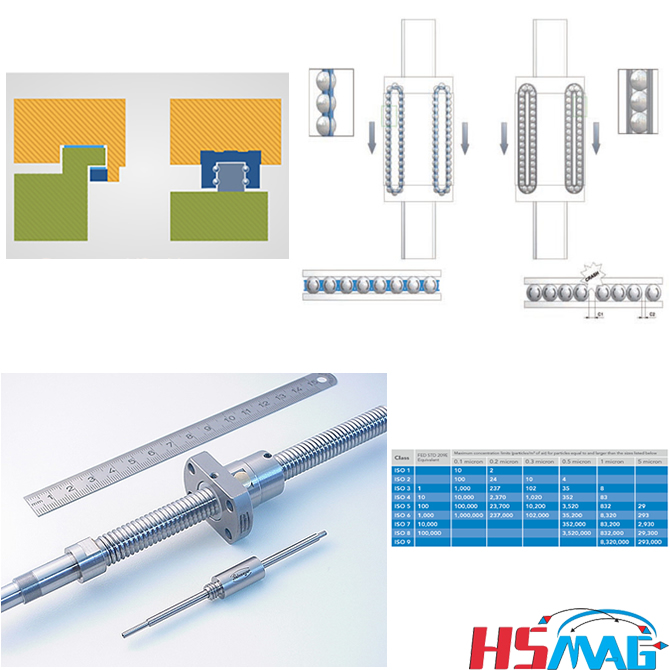 Lubrication is both friend and foe
Lubrication is useful not only for reducing friction and ensuring proper operation, but also for “trapping” some of the particles generated by a linear bearing or screw and preventing their release into the environment. But the lubrication itself can be a source of contamination if it’s released into the atmosphere. This is especially problematic with ball screws, which can “sling off” lubrication as they rotate.

Seals help keep lubrication inside the linear bearing or ball nut, but low-friction and non-contact types — while ideal because they don’t generate significant particulates on their own — can allow some lubrication to “slip by” and be released. This is why many cleanroom applications require a cleanroom-approved lubricant. These special formulations have no (or fewer) additives that contain solid particles, such as aluminum, silica, and PTFE.

Anodizing aluminum, for example, gives it good corrosion resistance. And carbon steel components can be treated with a cleanroom-compatible protective coating, such as black chrome or nickel, to prevent oxidizing.

A wide range of miniature guides and miniature screws are available in stainless steel versions, making them good choices for cleanroom applications with shorter stroke lengths and lighter loads. And miniature versions are typically offered with low-friction seals and low preload as standard options, so their particle generation is inherently less than their full-size counterparts.

Also keep in mind that fasteners are often coated with a black-oxide finish, which has a high rate of particle shedding, even though these components are static. For cleanroom applications, stainless steel hardware should be used wherever possible.

One way to eliminate or reduce many of the concerns raised above is to use linear motion components and systems that are inherently “clean.” These include air bearings for guidance and linear motors for driving. Both systems eliminate sliding or rolling contact, so they have virtually no friction and no particle generation.

For example, a linear motor stage with air bearing guides has —in theory — no friction and, therefore, no particle generation. However, in real-world situations, cable management is still a concern, because moving cables and cable carriers can generate particles. But this can be addressed by using cables and cable management systems specifically designed for cleanrooms.

Case in point: Some cable manufacturers offer products with special low-friction coatings to minimize particle generation, and some cable track manufacturers offer systems that reduce wear between chain sections through the use of abrasion-resistant joints. For shorter cable lengths, flat, self-supporting “trackless cables” can even eliminate the need for a cable track or carrier.