This genius idea comes to you from my brother!

As soon as I saw it, I knew I had to do it in my own house. My brother and his girlfriend have an apartment nearby, and he recently graduated from culinary school (with high honors – yes I’m proud!) He needed some storage for all of his knives and came up with this solution. It was one of those “DUH!” moments, so simple but it had never occurred to me.

I’ve been dying to replace my bulky countertop knife holder with a sleek wall mount version, but I didn’t want to drill through my tile. It’s no secret that I’m fickle, and who knows if I will want to change the location or remove something like this down the road…leaving holes in my travertine forever! There’s no way I could commit to that! 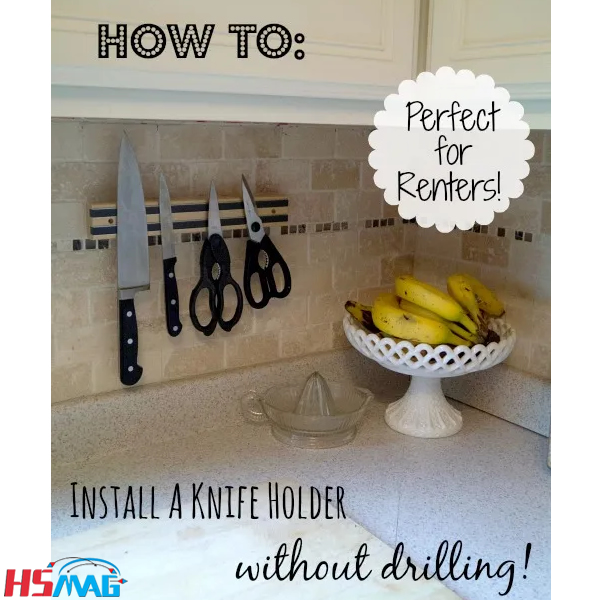 command strips for a knife holder

I’ve never used the “velcro” style hanging strips, only the hooks. But I saw how sturdy this was at my brother’s place, so I bought the same ones and applied all four to the block (purchased at Bed, Bath, and Beyond).

You could probably get by with only using two, but I’d rather overdo it than have the knives come spilling down! I followed the directions on the package for application, and – in less than 5 minutes – it was a huge transformation!

The counter was a cluttered mess…

I took the opportunity to remove the excess (wine rack, which we barely use) and notebooks and other clutter-y items.

Because of the damage free removal option, this solution would be perfect for renters along with non-committal folks like myself  But really, it’s just a great way to take advantage of some of that wall space without wrecking your backsplash (tile or not)!

I’m still working on the other end of the counter, but this small change really got me motivated  Hopefully I’ll have more “refreshed” kitchen pictures in the next week or so!

Psssst…I wasn’t paid or perked for this post, this was just an old fashioned ah-ha moment

this blog news from : http://lovelycraftyhome.com/2014/06/03/how-to-install-a-knife-holder-without-drilling/