Neodymium magnets can be called neodymium-iron-boron magnets, which are collective names for powerful magnets. Their chemical formula is Nd2Fe14B. They are a kind of artificial permanent magnets. They are by far the strongest permanent magnets. The material grades of NdFeB magnets are N35-N52; the shapes can be processed into different shapes according to specific requirements, including round, square, punched, magnetic tiles, magnetic rods, convex or trapezoidal.

So how to distinguish bonded NdFeB from sintered NdFeB? In fact, both of these magnets belong to NdFeB. These two magnets are distinguished according to their production processes. Bonded neodymium iron boron is actually formed by injection molding, and sintered neodymium iron boron magnets are formed by evacuating and then heating at high temperature. 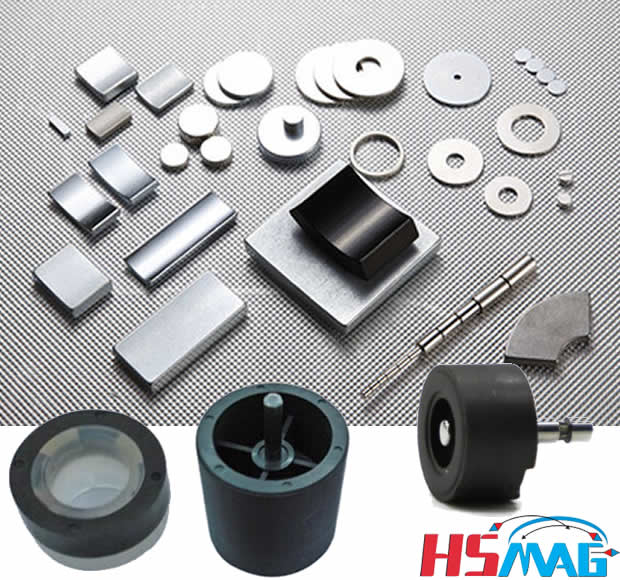 Sintered NdFeB magnets are anisotropic magnets produced by powder sintering. Generally, only blanks can be produced after sintering, and then mechanical processing (such as wire cutting, slicing, grinding, etc.) can become magnets of various shapes. Sintered neodymium-iron-boron is a brittle and hard material that is difficult to process. It has large losses during processing, high cost, poor dimensional accuracy, and poor corrosion resistance. The surface requires electroplating. But the advantage is higher performance, which has been achieved above 50M.
Taken together, the magnetic properties of bonded NdFeB magnets are only about 5% of sintered. At present, the magnetic energy product of sintered NdFeB magnets can reach more than 50M, while bonded magnets are generally below 10M, and the best is only 12M. The performance of the magnetic powder used for the bonded magnet is generally 15M, and the maximum after the bonded magnet is made is only 10.5M. Therefore, sintered NdFeB is generally used in a wider range than bonded NdFeB.