In a traditional DC electric motor, a central core of tightly wrapped magnetic material (known as the rotor) spins at high speed between the fixed poles of a magnet (known as the stator) when an electric current is applied. In an AC induction motor, electromagnets positioned around the edge of the motor are used to generate a rotating magnetic field in the central space between them. This “induces” (produces) electric currents in a rotor, causing it to spin. In an electric car, DC or AC motors like these are used to drive gears and wheels and convert rotational motion into motion in a straight line. 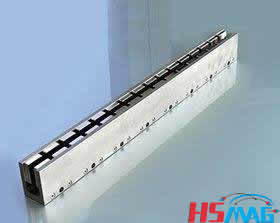 A linear motor is effectively an AC induction motor that has been cut open and unwrapped. The “stator” is laid out in the form of a track of flat coils made from aluminum or copper and is known as the “primary” of a linear motor. The “rotor” takes the form of a moving platform known as the “secondary.” When the current is switched on, the secondary glides past the primary supported and propelled by a magnetic field.

Linear motors have a number of advantages over ordinary motors. Most obviously, there are no moving parts to go wrong. As the platform rides above the track on a cushion of air, there is no loss of energy to friction or vibration (but because the air-gap is greater in a linear motor, more power is required and the efficiency is lower). The lack of an intermediate gearbox to convert rotational motion into straight-line motion saves energy. Finally, as both acceleration and braking are achieved through electromagnetism, linear motors are much quieter than ordinary motors.

The main problem with linear motors has been the cost and difficulty of developing suitable electromagnets. Enormously powerful electromagnets are required to levitate (lift) and move something as big as a train, and these typically consume substantial amounts of electric power. Linear motors often now use superconducting magnets to solve this problem.

If electromagnets are cooled to low temperatures using liquid helium or nitrogen their electrical resistance disappears almost entirely, which reduces power consumption considerably. This helpful effect, known as superconductivity, has been the subject of intense research since the mid 1980s and makes large-scale linear motors that much more viable.