Inductive position and speed sensors come in a wide variety of shapes, sizes and configurations. All inductive sensors can be considered to work on the principle of transformers, through a physical phenomenon based on alternating current induction. This phenomenon was first discovered by Michael Faraday in 1830, when he discovered that a current-carrying conductor can “induced” a current in another conductor. Faraday’s findings are used in electric motors and generators, and in inductive sensors for position and speed measurement.

In a simple proximity sensor (proximity switch), the sensor power supply generates an alternating current in the coil (winding). When a conductive or magnetically permeable object, such as a steel disc, comes close to the coil, it changes the coil’s impedance. When a threshold is reached, a signal is output, indicating the presence of an object. Proximity sensors are often used to detect the presence or absence of metallic objects, and the output typically simulates a switching action. This type of sensor is widely used where electrical contacts in conventional switches would be problematic, especially where large amounts of dust or water are present. Chances are you’ll be at a car wash station, or look at the landing gear of an airplane when you’re boarding an airplane, and you’ll see a lot of inductive proximity switch sensors.

Variable inductance and variable reluctance sensors typically produce an electrical signal proportional to the relative displacement between a conductor or magnetically permeable object (usually a steel rod) and a coil. Like a proximity sensor, the coil is fed with an alternating current, and the impedance of the coil is proportional to the relative displacement between the object and the coil. This type of sensor is often used to measure the displacement of a piston rod in a cylinder, for example in a pneumatic or hydraulic system, the entire outer diameter of the coil can be placed in the center bore of the piston rod.

The synchronizer works by measuring the electromagnetic coupling between the coils when there is a relative displacement between the coils. Coils are usually rotating and require electrical leads between moving and stationary parts (often called rotors and stators). Synchronizers can be extremely accurate and are used in industrial metrology, radar antenna and telescope applications. As we all know, synchronizers are very expensive, and now they are becoming less and less common, and have basically been replaced by brushless resolvers. A brushless resolver is another form of inductive sensor, but the electrical leads are only on the stator windings.

LVDTs, RVDTs and resolvers operate by measuring the change in inductive coupling between the primary and secondary windings. The primary winding energy couples to the secondary windings, but the energy coupled to each secondary winding is proportional to the relative displacement of the magnetically permeable object. In an LVDT, this is usually a metal rod that passes through the bore of the winding. In an RVDT or resolver, there is usually a specially shaped rotor or pole piece that rotates relative to coils arranged around the circumference of the rotor. Typical applications for LVDTs and RVDTs include hydraulic servo systems for aircraft ailerons, engines, and fuel controls. A typical application for resolvers is commutation of brushless motors.

A significant advantage of inductive sensors is that the associated signal processing circuitry does not need to be located close to the induction coil. This allows the induction coil to be located in harsh environments where other sensor technologies, such as magnetic or optical sensors, may not be suitable because they require relatively fragile silicon-based electronic circuits at the point of measurement. 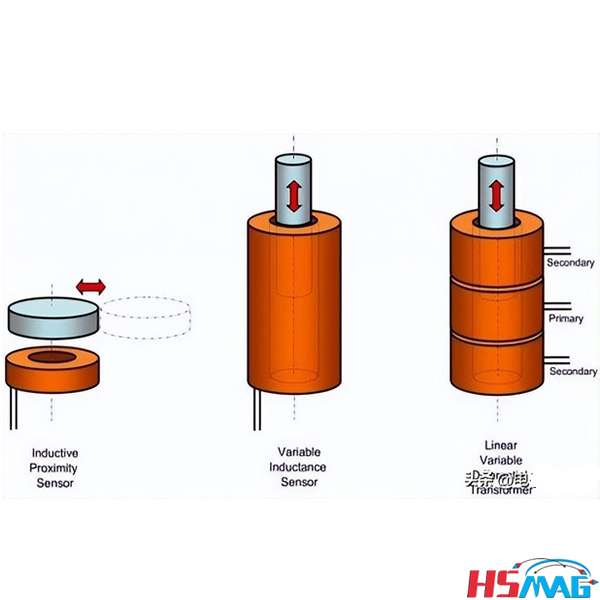 application
Inductive sensors have a long track record of performing reliably in extreme conditions. As such, they are often the first choice for safety-related, safety-critical, or high-reliability applications. Such applications are common in military, aerospace, rail and heavy industry.

This good reputation has to do with its basic physics and workings and is not influenced by:

Advantages and disadvantages of inductive sensors

Due to the nature of the basic working elements, wound coils and metal parts, most inductive sensors are very rugged and durable. Given their solid reputation, an obvious question is “why aren’t inductive sensors used more often”? The reason is that their solid structure is both a strength and a weakness. Inductive sensors tend to be accurate, reliable, and durable, but can also be bulky, bulky, and heavy. In addition, this large volume and the requirement for precise coil winding make them expensive to produce, especially for high-accuracy sensors, which require precise coil winding. Beyond simple proximity sensors, more complex inductive sensors are prohibitively expensive for many mainstream, commercial or industrial applications.

Another reason for the relatively few applications of inductive sensors is that they are difficult for design engineers to specify. This is because, for each sensor, it is usually necessary to separately specify and purchase corresponding AC excitation signal generation and signal processing circuits. This usually requires extensive knowledge and experience in analog circuit technology. Since young engineers tend to focus on digital electronic circuits, they will view these disciplines as unwanted “black arts”.

Using PCB printed circuit board technology enables sensors to be printed on thin flexible substrates, eliminating the need for traditional cables and connectors. The flexibility of this technology, both in terms of the physical structure and the rapid delivery of customized products for OEMs, is a great advantage.

Like traditional inductive sensing technology, this technology provides reliable and accurate measurements in harsh environments. In addition, there are some important advantages:

The picture above is a good illustration of the advantages above, the traditional 150mm stroke LVDT and the new generation replacement, which is custom made for linear actuator manufacturers. The stark contrast can be seen from the photos. This advantage is even more powerfully illustrated when one considers that the new generation of inductive sensors also includes corresponding signal generation and processing circuitry (parts of the traditional LVDT not shown).

In contrast, the advantages of inductive sensors are: