What do a wrecking yard, a rock concert and your front door have in common? They each use electromagnets, devices that create a magnetic field through the application of electricity. Wrecking yards employ extremely powerful electromagnets to move heavy pieces of scrap metal or even entire cars from one place to another. Your favorite band uses electromagnets to amplify the sound coming out of its speakers. And when someone rings your doorbell, a tiny electromagnet pulls a metal clapper against a bell.

Mechanically, an electromagnet is pretty simple. It consists of a length of conductive wire, usually copper, wrapped around a piece of metal. Like Frankenstein’s monster, this seems like little more than a loose collection of parts until electricity comes into the picture. But you don’t have to wait for a storm to bring an electromagnet to life. A current is introduced, either from a battery or another source of electricity, and flows through the wire. This creates a magnetic field around the coiled wire, magnetizing the metal as if it were a permanent magnet. Electromagnets are useful because you can turn the magnet on and off by completing or interrupting the circuit, respectively.

Before we go too much farther, we should discuss how electromagnets differ from your run-of-the-mill “permanent” magnets, like the ones holding your Popsicle art to the fridge. As you know, magnets have two poles, “north” and “south,” and attract things made of steel, iron or some combination thereof. Like poles repel and opposites attract (ah, the intersection of romance and physics). For example, if you have two bar magnets with their ends marked “north” and “south,” the north end of one magnet will attract the south end of the other. On the other hand, the north end of one magnet will repel the north end of the other (and similarly, south will repel south). An electromagnet is the same way, except it is “temporary” — the magnetic field only exists when electric current is flowing. 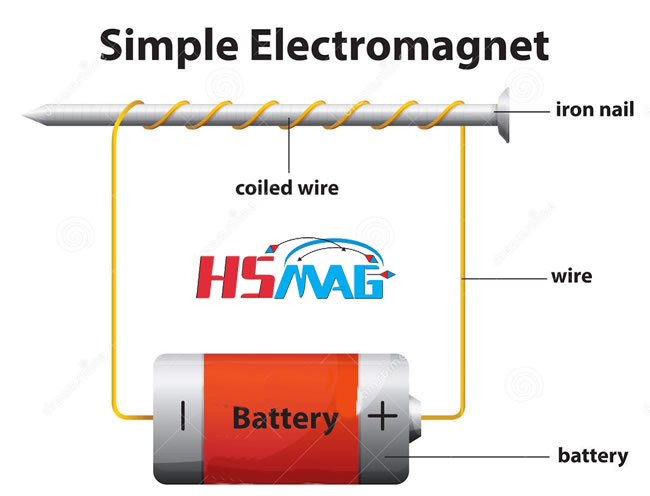 The doorbell is a good example of how electromagnets can be used in applications where permanent magnets just wouldn’t make any sense. When a guest pushes the button on your front door, the electronic circuitry inside the door bell closes an electrical loop, meaning the circuit is completed and “turned on.” The closed circuit allows electricity to flow, creating a magnetic field and causing the clapper to become magnetized. The hardware of most doorbells consist of a metal bell and metal clapper that, when the magnetic charges causes them to clang together, you hear the chime inside and you can answer the door. The bell rings, the guest releases the button, the circuit opens and the doorbell stops its infernal ringing. This on-demand magnetism is what makes the electromagnet so useful.

In this article, we’ll take a closer look at electromagnets and discover how these devices take some pretty cool science and apply it to gizmos all around us that make our lives easier.

The Sticking Power of Electromagnets

As we mentioned in the introduction, basic electromagnets aren’t all that complicated; you can construct a simple version of one yourself using materials you probably have lying around the house. A conductive wire, usually insulated copper, is wound around a metal rod. The wire will get hot to the touch, which why insulation is important. The rod on which the wire is wrapped is called a solenoid, and the resulting magnetic field radiates away from this point. The strength of the magnet is directly related to the number of times the wire coils around the rod. For a stronger magnetic field, the wire should be more tightly wrapped.

OK, there’s a little more to it than that. The tighter the wire is wound around the rod, or core, the more loops the current makes around it, increasing the strength of the magnetic field. In addition to how tightly the wire is wound, the material used for the core can also control the strength of the magnet. For example, iron is a ferromagnetic metal, meaning it is highly permeable [source: Boston University]. Permeability is another way of describing how well the material can support a magnetic field. The more conductive a certain material is to a magnetic field, the higher its permeability .

All matter, including the iron rod of an electromagnet, is composed of atoms. Before the solenoid is electrified, the atoms in the metal core are arranged randomly, not pointing in any particular direction. When the current is introduced, the magnetic field penetrates the rod and realigns the atoms. With these atoms in motion, and all in the same direction, the magnetic field grows. The alignment of the atoms, small regions of magnetized atoms called domains, increases and decreases with the level of current, so by controlling the flow of electricity, you can control the strength of the magnet. There comes a point of saturation when all of the domains are in alignment, which means adding additional current will not result in increased magnetism.

By controlling the current, you can essentially turn the magnet on and off. When the current is turned off, the atoms return to their natural, random state and the rod loses its magnetism (technically, it retains some magnetic properties but not much and not for very long).

With a run-of-the-mill permanent magnet, like the ones holding the family dog’s picture to the refrigerator, the atoms are always aligned and the strength of the magnet is constant. Did you know that you can take away the sticking power of a permanent magnet by dropping it? The impact can actually cause the atoms to fall out of alignment. They can be magnetized again by rubbing a magnet on it.

The electricity to power an electromagnet has to come from somewhere, right? In the next section, we’ll explore some of the ways these magnets get their juice.

Putting the “Electro” in “Electromagnet”

Let’s start with a look at how household batteries function. Most batteries have two easily identifiable poles, a positive and a negative. When the battery isn’t in use, electrons collect at the negative pole. When the batteries are inserted into a device, the two poles come into contact with the sensors in the device, closing the circuit and allowing electrons to flow freely between the poles. In the case of your remote, the device is designed with a load, or exit point, for the energy stored in the battery [source: Grossman]. The load puts the energy to use operating the remote control. If you were to simply connect a wire directly to each end of a battery with no load, the energy would quickly drain from the battery.

While this is happening, the moving electrons also create a magnetic field. If you take the batteries out of your remote, it will likely retain a small magnetic charge. You couldn’t pick up a car with your remote, but maybe some small iron filings or even a paper clip.

On the other end of the spectrum is the Earth itself. By the definition we discussed earlier, an electromagnet is created when electrical currents flow around some ferromagnetic core. The Earth’s core is iron, and we know it has a North Pole and a South Pole. These aren’t just geographical designations but actual opposing magnetic poles. The dynamo effect, a phenomenon that creates massive electrical currents in the iron thanks to the movement of liquid iron across the outer core, creates an electrical current. This current generates a magnetic charge, and this natural magnetism of the Earth is what makes a compass work. A compass always points north because the metal needle is attracted to the pull of the North Pole.

Clearly, there’s a wide range of electromagnet applications between small, homemade science experiments and the Earth itself. So, where do these devices pop up in the real world? In the next section, we’ll take a look at how our everyday lives are affected by electromagnetism.