Based on the principle that if a current is allowed to flow through thin conducting material that is exposed to a magnetic field, another voltage is produced. The switch contains a permanent magnet, a thin semiconductor layer made of gallium arsenate crystal (Hall layer), and a shutter wheel. The Hall layer has a negative and a positive terminal connected to it. Two additional terminals located on either side of the Hall layer are used for the output circuit. The shutter wheel consists of a series of alternating windows and vanes. It creates a magnetic shunt that changes the strength of the magnetic field from the permanent magnet.

A steady current is applied to the crystal of the Hall layer. This produces a signal voltage that is perpendicular to the direction of current flow and magnetic flux. The signal voltage produced is a result of the effect the magnetic field has on the electrons. When the magnetic field bisects the supply current flow, the electrons are deflected toward the Hall layer negative terminal. This results in a weak voltage potential being produced in the Hall switch.

A shutter wheel is attached to a rotational component. As the wheel rotates, the shutters (vanes) will pass in this air gap. When a shutter vane enters the gap, it intercepts the magnetic field and shields the Hall layer from its lines of force. The electrons in the supply current are no longer disrupted and return to a normal state. This results in low voltage potential in the signal circuit of the Hall switch.

The signal voltage leaves the Hall layer as a weak analog signal. To be used by the computer, the signal must be conditioned. It is first amplified because it is too weak to produce a desirable result. The signal is also inverted so that a low input signal is converted into a high output signal. It is then sent through a Schmitt trigger where it is digitized and conditioned into a clean square wave signal. The signal is finally sent to a switching transistor. The computer senses the turning on and off of the switching transistor to determine the frequency of the signals and calculates speed.

The Hall-effect just discussed describes its usage as a switch. It can also be designed as an analog (or linear) sensor that produces an output voltage that is proportional to the applied magnetic field. This makes them useful for determining to position of a component instead of just rotation. For example, this type of sensor can be used to monitor fuel level or to track seat positions in memory seat systems.

A fuel level indication can be accomplished with a Hall-effect sensor by attaching a magnet to the float assembly. As the float moves up and down with the fuel level, the gap between the magnet and the Hall element will change. The gap changes the Hall-effect and thus the output voltage. 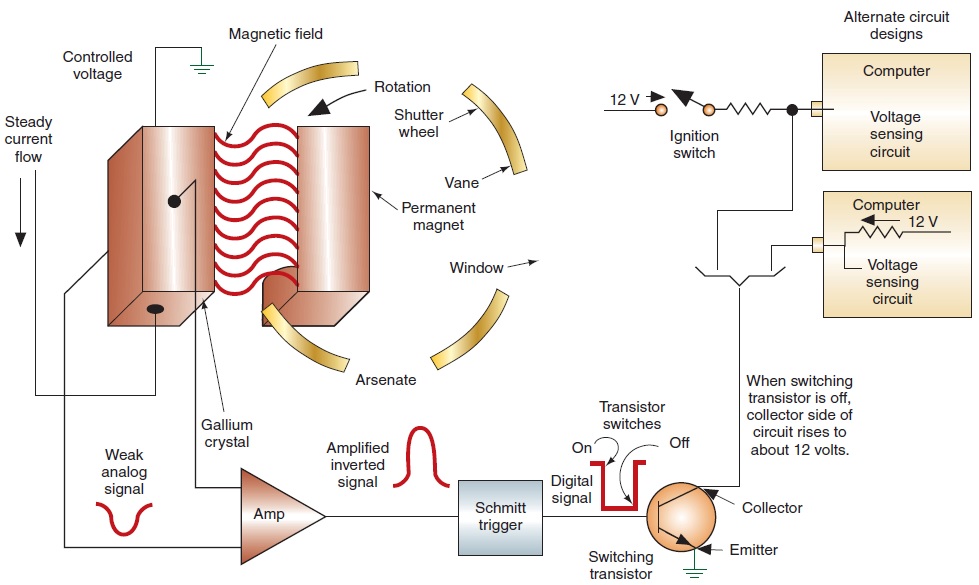 Typical circuit of a Hall-effect switch

When the motor rotates and the influence of the magnetic field turns on the Hall sensor, the signal terminal 3 is connected to ground within the sensor. This pulls the signal voltage low and results in the formation of a series circuit from the reference supply to terminal 3. Since each of the pull-up resistors are equal the voltage drop will be split between the two. Approximately half the voltage will be dropped across the pull-up resistor in the computer and the other half over the pull-up resistor in the motor assembly. The Hall-effect sensor will remain powered since the reference voltage to terminal 1 is connected between the two resistors and the 6 volts on the circuit is sufficient to operate the sensor.