Hall effect encoders use magnetic phased arrays that contain hall sensor elements arranged in a pattern to match a magnetic wheel. A signal is produced as the sensor passes over the magnetic field which is then interpolated to the desired resolution. This magnetic phased array technology is now available in an IC Chip which integrates both the sensor and the processor in the same chip which considerably decreases the chip count and pc board complexity for a robust, compact, easily manufacturable component. Magnetic Hall Phased Array technology represents the leading edge magnetic encoder technology today. 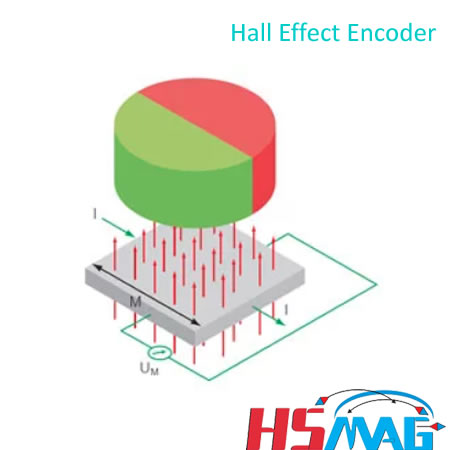 Diagram: Inside a magnetic hall effect encoder, a Hall-array sensor averages the signal over multiple detectors to deliver robust, high-resolution performance that is insensitive to misalignment, shock, and vibration.

The output voltage, called the Hall voltage, (VH) of the basic Hall Element is directly proportional to the strength of the magnetic field passing through the semiconductor material (output ∝ H). This output voltage can be quite small, only a few microvolts even when subjected to strong magnetic fields so most commercially available Hall effect devices are manufactured with built-in DC amplifiers, logic switching circuits and voltage regulators to improve the sensors sensitivity, hysteresis and output voltage. This also allows the Hall effect sensor to operate over a wider range of power supplies and magnetic field conditions.

A magnetic hall effect encoder is designed to output reliable digital feedback in the most demanding and harshest of application environments. Applications for this technology usually require broad temperature specifications, high shock and vibration resistance, robust sealing, and contaminant protection all while focusing on output signal reliability, easy installation, and downtime reduction. Popular applications for magnetic hall effect encoders include speed and position feedback in construction, agriculture, mining, forestry and in food and beverage applications with wash downs or corrosive chemicals.

Hall effect sensors are activated by a magnetic field and in many applications the device can be operated by a single permanent magnet attached to a moving shaft or device. There are many different types of magnet movements, such as “Head-on”, “Sideways”, “Push-pull” or “Push-push” etc sensing movements. Which every type of configuration is used, to ensure maximum sensitivity the magnetic lines of flux must always be perpendicular to the sensing area of the device and must be of the correct polarity.

Also to ensure linearity, high field strength magnets are required that produce a large change in field strength for the required movement. There are several possible paths of motion for detecting a magnetic field, and below are two of the more common sensing configurations using a single magnet: Head-on Detection and Sideways Detection. 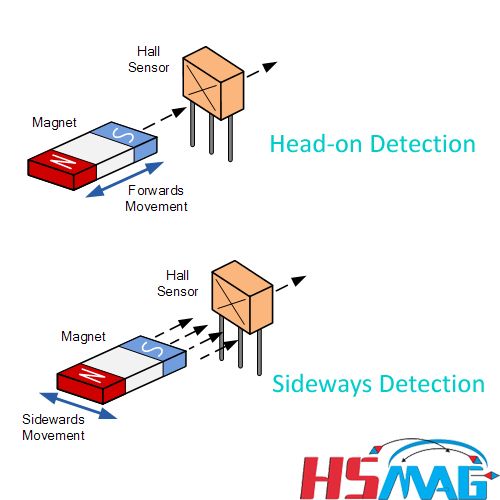 Head-on Detection
head on hall effect sensing
As its name implies, “head-on detection” requires that the magnetic field is perpendicular to the hall effect sensing device and that for detection, it approaches the sensor straight on towards the active face. A sort of “head-on” approach.

Linear devices can also differentiate between positive and negative magnetic fields. Non-linear devices can be made to trigger the output “ON” at a pre-set air gap distance away from the magnet for indicating positional detection.

Sideways Detection
sideways hall effect sensing
The second sensing configuration is “sideways detection”. This requires moving the magnet across the face of the Hall effect element in a sideways motion.

Sideways or slide-by detection is useful for detecting the presence of a magnetic field as it moves across the face of the Hall element within a fixed air gap distance for example, counting rotational magnets or the speed of rotation of motors.

Depending upon the position of the magnetic field as it passes by the zero field centre line of the sensor, a linear output voltage representing both a positive and a negative output can be produced. This allows for directional movement detection which can be vertical as well as horizontal.

There are many different applications for Hall Effect Sensors especially as proximity sensors. They can be used instead of optical and light sensors were the environmental conditions consist of water, vibration, dirt or oil such as in automotive applications. Hall effect devices can also be used for current sensing.

We know from the previous tutorials that when a current passes through a conductor, a circular electromagnetic field is produced around it. By placing the Hall sensor next to the conductor, electrical currents from a few milliamps into thousands of amperes can be measured from the generated magnetic field without the need of large or expensive transformers and coils.

As well as detecting the presence or absence of magnets and magnetic fields, Hall effect sensors can also be used to detect ferromagnetic materials such as iron and steel by placing a small permanent “biasing” magnet behind the active area of the device. The sensor now sits in a permanent and static magnetic field, and any change or disturbance to this magnetic field by the introduction of a ferrous material will be detected with sensitivities as low as mV/G possible.