For Circular Halbach Arrays, the simplest geometry is an arrangement of wedge shape magnets, with various magnetic orientations around a common axis. 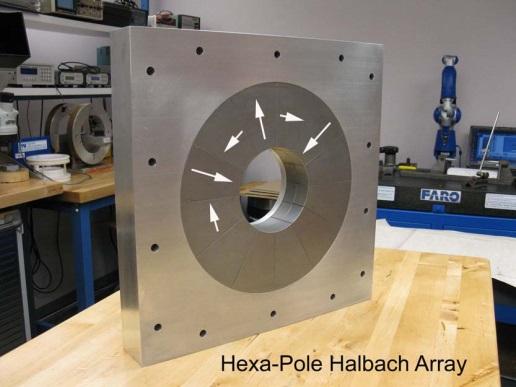 Planar Halbach Arrays can be thought of as an unrolled Halbach cylinder. This variation does not necessarily create a uniform field, but it does create a very strong magnetic field on one working-face.

Circular Halbach Arrays (on the OD iteration) are used in:

Circular Halbach Arrays (on the ID iteration) are used to:

External Demagnetizing Fields
This is important especially in Halbach Arrays used for Rotors.
Cost
Required Lifetime in Service
Available Room or Volume that Can Be Allotted to the Array
Size of the Array Assembly
Halbach Arrays depend on the assemblage of magnets, which by their nature attract and repel each other. The size of the array complicates its construction.

The most obvious benefit of a Halbach-style Array is that the field produced is very strong when compared to other arrays having the same amount of the magnet alloy. The arrangement essentially increases the efficiency of the magnetic circuit.

The primary disadvantage of the Halbach Array geometry is that it is difficult to put together, resulting in potentially higher manufacturing costs than other potential solutions. This is because all of the magnet elements are repelling each other in a Halbach Array. This can create a variety of assembly issues including: needing to assemble the magnets magnetized, combating the forces during assembly, and ensuring the assembly will “hold together” during its use.

Another disadvantage is that Halbach Arrays may have an issue in high heat applications because the array elements apply a demagnetizing field on each other. As the operating temperature increases, a magnet is more susceptible to demagnetizing, and the neighboring magnet demagnetization is exacerbated.

Not all applications are good candidates for a using a Halbach Array. It has been pointed out that the Halbach Array is a more efficient use of magnet alloy, but it is important to consider the difficulty of design and manufacture before implementing a Halbach Array. There are many opportunities for a Halbach design to improve performance, but the benefit will come with a cost.