Have you ever sat around on a rainy day contemplating your computer’s hard disk drive? Though often taken for granted, this magnetized device makes it possible to store and retrieve information digitally – in everything from video games to iPods to your personal computer.

Let’s take a walk through all that history, picking up a few facts about electromagnetism along the way.

A Few Facts about Electromagnetism 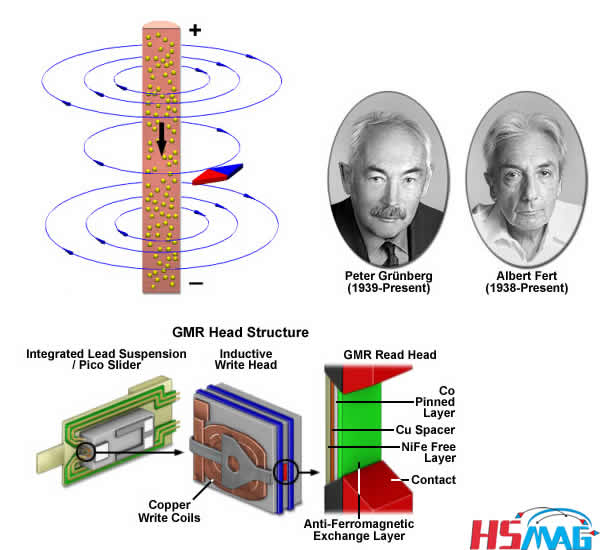 These basic facts made possible the first hard disk drives. Developed in the late 1950s by IBM, these storage devices consisted (as they still do) of rigid disks (sometimes called platters) covered by zones of ferromagnetic metal. What’s special about ferrromagnetic metals, such as iron and cobalt, is they can be magnetized: They will align with an external magnetic field and change alignment if the external field changes. In early hard disk drives, a single disk head, positioned at the end of a moveable arm suspended over the disk, “wrote” on and “read” from the magnetic zones.hard-drive

During the writing process, an electrical current ran through a copper coil inside the disk head, producing a magnetic field around it. A ferromagnetic zone on the disk, as the head passed above it, would align itself with that field, adopting its direction and thus encoding on the disk information in the form of a bit, a binary language of 0s and 1s. A bit magnetized in one direction represented a 0; in the opposite direction it represented a 1. Depending on the direction of the current moving through the induction coil, the head would thus encode either a 1 or 0 on a targeted bit. (Eight bits make up a byte of data, the amount of information necessary to encode a character, such as a “w.”)

During the reading process, the transfer of information went in the opposite direction. As the hard disk spun around beneath the head, the head detected the moving magnetic fields in each of the bits on the disk via electromagnetic induction. The directions of these fields were read by the head (the current induced in the coil went one way or the other) and translated this information into 0s and 1s. This method of reading and writing with a single head was standard in computers for decades. However, as demand for higher storage capacities increased, a new method was needed.

Increasing storage capacity requires cramming in more bytes per square inch of disk space, which means decreasing the size of the ferromagnetic zones associated with them. But the smaller the magnetic zones got, the weaker their magnetic fields became – so weak that induction coil heads could not detect them. The solution was to divide the head in two, based on specific demands for reading and writing. The writing head continued to use an induction coil to magnetize and store bits of information on the disk via electromagnetic induction. However a new, more sensitive reading head relied not on induction but on electric resistance, specifically by exploiting the principle of anisotropic magnetoresistance.

To understand AMR, you first have to understand that when electricity (made up of moving electrons) passes through a conductor, it encounters resistance when those electrons bump into various obstacles; scientists call this scattering. In 1857, Britain’s Lord Kelvin discovered that when the conductor involved is ferromagnetic, the electrical current could be influenced by an external magnetic field. Specifically, if a magnetic field was applied along the same lines as the current, resistance diminished. But resistance increased when a magnetic field was applied perpendicular to the current.

Introduced commercially in 1991 by IBM, magnetoresistance read heads manipulate this phenomenon. The head contains a small ferromagnetic read element through which a current runs. When this element passes over a bit in the disk whose magnetic field is aligned with the current, the resistance in that current diminishes. But when it passes over a bit with a magnetic field perpendicular to the current, resistance rises. This pattern of high resistance / low resistance yields 0s and 1s that are interpreted by the computer. MR read heads can detect much weaker magnetic fields than induction coil read heads, resulting in about four times more storage capacity.grunberg and fert

As the story usually goes, technology marched on. The trend toward tinier, more powerful electronics soon stretched the detection limits of MR heads, requiring an even more sensitive mechanism for reading digital information — one provided by the GMR effect. The discovery of GMR, made simultaneously and independently in 1988 by France’s Albert Fert and Germany’s Peter Grünberg, was made possible by the emerging field of nanotechnology. Both Fert and Grünberg, working with layers of metal only a few atoms thick, discovered that they could dramatically amplify resistance to an electrical current passing through a magnetic material.

GMR is a bit more complex than MR, and to understand it, it’s important to understand electron spin. All materials, of course, are made up of atoms that contain electrons. As it turns out, electrons generate their own tiny magnetic fields as they rotate, which are oriented in one of two positions referred to as up or down. Spin plays a key role in magnetization. Most of the electrons in a magnetized metal have spins parallel to the material’s magnetic field, although a few oppose it.

Remember that some electrons scatter as they conduct electricity, resulting in resistance? This scattering is particularly pronounced at the interface between magnetic and non-magnetic materials. In their experiments, Fert and Grünberg both used alternating layers of iron (magnetic) and chromium (non-magnetic). Working at the nano scale, they could manipulate the two magnetic layers separately. So depending on how these fields were oriented, an electrical current running through this sandwich of layers would experience high or low resistance. What excited Fert and Grünberg was that the difference in resistance was much higher than observed in AMR. A lot of other people were excited, too: Their accomplishment won them the 2007 Nobel Prize in Physics.

a layer of ferromagnetic material (often a nickel-iron alloy) that is closest to the disk and acts as the sensor. It’s called the free layer because the direction of its magnetic field switches to align with the particular bit it happens to be reading at any given moment
a spacer of non-magnetic material (like copper) that serves as a buffer between the two magnetized layers
a pinned layer (often cobalt) that has a fixed, unchanging magnetic orientation
an exchange layer of a material that insulates the pinned layer from outside magnetic fields

As the read head passes over the disk, the free layer shifts its magnetic orientation to match that of the bit. So sometimes the direction of the free layer’s magnetic field is aligned with the field of the pinned layer (which never changes), and sometimes it is opposite. When they are aligned, most of their electrons will share the same up or down spin. As some of these electrons pass through the layers in the form of current, there will be minimal scattering. The low resistance means a current will be detected, and the computer computes a 1 bit.

When the free layer’s magnetic orientation switches to opposite that of the pinned layer, there’s a much different result. The electrons in the two layers have opposing spins. So as the current passes through the magnetized layers, those electrons will scatter in one or the other of them, resulting in a much weaker current and a 0 bit.

In addition to winning Fert and Grünberg a trip to Stockholm and a nice pile of cash, their discovery of GMR revolutionized the sensitivity of hard disk drive read heads, allowing for the miniaturization of electronics as we now know it: pocket-size digital music players and sleek laptops with more memory than hulking desktop models. Their work also contributed to the emerging field of electronics – called spintronics – that is developing a new generation of computers that will store information not in bits but in quantum bits (qubits), exploiting electron spin and other quantum properties.