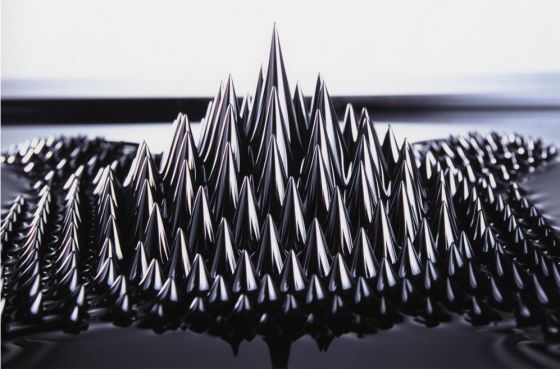 A ferrofluid (from the Latin ferrum, meaning iron) is a liquid which becomes strongly polarised in the presence of a magnetic field. It is a colloidal mixture comprising extremely small magnetic particles suspended in a synthetic oil. The particles are coated with a a soap or detergent to prevent them from clumping together.

Ferrofluids are composed of nanoscale ferromagnetic particles suspended in a carrier fluid, usually an organic solvent or water. The ferromagnetic nano-particles are coated with a surfactant to prevent their agglomeration (due to van der Waals and magnetic forces). Although the name may suggest otherwise, ferrofluids do not display ferromagnetism, since they do not retain magnetisation in the absence of an externally applied field. In fact, ferrofluids display paramagnetism, and are often referred as being “superparamagnetic” due to their large magnetic susceptibility.

Yes in a way that if you surely would not want to drink fine iron particles suspended in oil, would you? That certainly can not be good for your health.

No
If you take basic safety precautions, it’s not bad at all.

Ferrofluids FAQ 2 – Are ferrofluids electrically conductive?
Yes And No

Actually, Ferrofluids are considered to be dielectric; meaning it rapidly prevent or rapidly quench electric discharges

Ferrofluids are colloidal liquids made of Nano-scale ferromagnetic, or ferrimagnetic, particles (such as iron and copper) suspended in a carrier fluid. As the metals are electrically conductive materials, dispersion of these particles in the water should result in high electrical conductivity of the magnetic fluid.

Ferrofluids FAQ 3 – So why these fluids are considered as dielectric fluids?

Actually, Not all ferrofluids are dielectric. Aqueous ferrofluids would almost certainly be electrically conductive, because they contain a lot of ionic surfactant like tetramethylammonium hydroxide. Oil-based ferrofluids on the other hand would not have the same properties because the oil won’t get ionized like water does.

Unless you can form a continuous chain of touching magnetic nanoparticles, you won’t get electrical conductivity. In fact, if you did that, you’d have a clump sitting underneath the liquid instead of a dispersed suspension.

Ferrofluids FAQ 4 – What are ferrofluids made of?

Ferrofluids are colloidal liquids made of nanoscale ferromagnetic, or ferrimagnetic, particles suspended in a carrierfluid (usually an organic solvent or water).

Ferrofluid was discovered in 1963 by NASA’s Steve Papell as a liquid rocket fuel that could be drawn toward a pump inlet in a weightless environment by applying a magnetic field.

Actually its because of the competition of different forces acting on the ferrofluid particles. 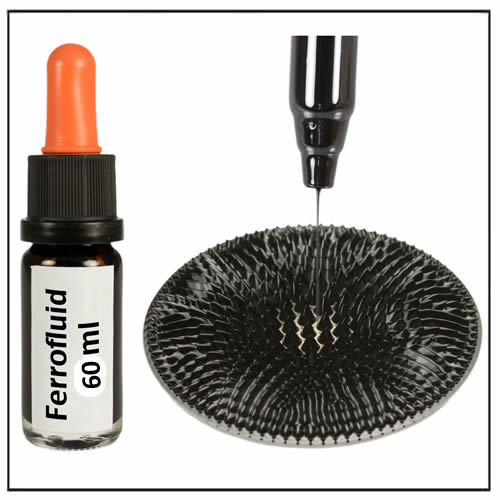 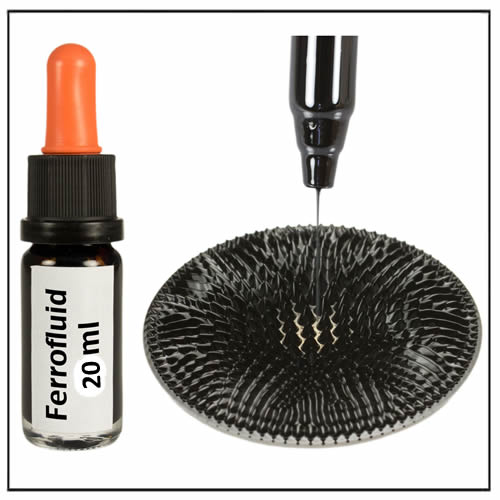 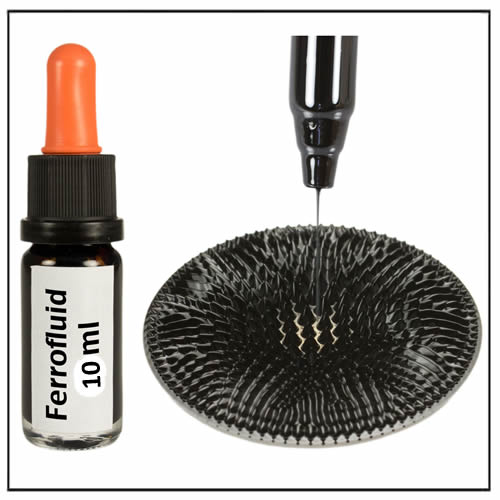