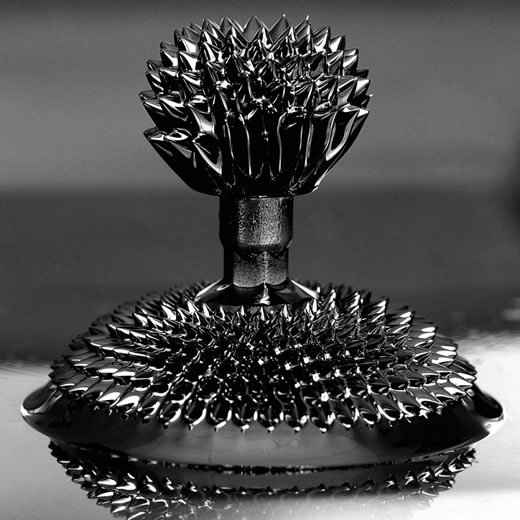 Most of the medicines work by targeting to exploit the relative size between magnetic nanoparticles and living cells. So some ferrofluids are composed of iron oxide nanoparticles and are called SPION which is abbreviation for Super Paramagnetic Iron oxide Nanoparticles.

How this works is that the drugs are enclosed by these ferrofluids in some way. The combination is injected to the body that needs treatment. The combination is now held at a required body part by magnetic field and allowed to play its part for around one hour.

The magnetic field is then switched off and the drug dispenses through the body. Doing this would decrease the amount of necessary dose down to a level where there is no adverse side effects.

These are generally used for drugs with harmful side effects like in chemotherapy. Ferrofluids are used in experimental treatment of cancer by magnetic hyperthermia.

See here in detail about medical application of ferrofluid and how it works to treat cancer.

Ferofluids are used to form a kid of liquid seal around the spinning drive which prevents debris from getting into hard drives.

Ferrofluids have a strong friction reducing capacity. If ferrofluids are used in the surface of a strong enough magnets like the one made with neodynum, it causes the magnet to slip across smooth surfaces with very little resistance.

Ferrofluids can also be used in semi active dampers which accounts for their widespread usability in mechanical and aerospace engineering. The problems with dampers is that the passive dampers are bulkier while the active ones consume way too much power.

Ferrofluid based dampers solve both of these shortcomings and is increasingly popular in helicopter scene as the helicoptors are subjected to large inertial and aerodynamic vibrations.

Ferrofluids can be made of self-assemble nanometer scale like sharp tips under the influence of a magnetic fields. So when these reach to critical thinness, these needles begin emitting jets that can be used a thruster mechanism to propel small satelites. This is one for the future of course.

Ferrofluids can be used to image magnetic domain structures on the surface of ferromagnetic materials. This was a technique developed by Francis Bitter.

Ferrofluids have insane refractive properties. Each grain, a micromagnet reflects light. This enables ferrofluids to measure the specific viscosity of liquids. The liquid is placed between a polarizer and analyzer which is illuminated by a helium-neon laser.

Ferrofluids aid heat transfer by a process called thermomagnetic convection. This is particularly useful when the conventional convection is inadequate; like very small microscale devices or under reduced gravity conditions.

When ferrofluid are are subjected to ferrofluid with varying susceptibility, no uniform magnetc body force is formed. This leads to thermomagnetic convection.

The researches being done on an adaptive optics shape-shifting magnetic mirror from ferrofluid for Earth-based astronomical telescope is taking quite a pace.

Few selected art and science museums have devices that can use magnets to make ferrofluids move around specially shaped surfaces. Ferrofluids can also be made into sculptures.

Ferrofluid In Lubrication And Breaking

Ferrofluids are used to cool down overheated wires that move inside a loudspeaker. Basically, the ferrofluid is responsible for three major things in loudspeakers

Much of the energy that is fed into a loudspeaker is wasted as heat. In order to dissipate some of the heat, heat sinks can be used.