Magnetic materials have several applications. VHS tapes and audio cassettes encode information on magnetic coatings, as do floppy disks. The magnetic strip on the backs of credit cards stores contact information on the owner’s account. Electromagnets are even used in computer monitors and cathode ray tube televisions. 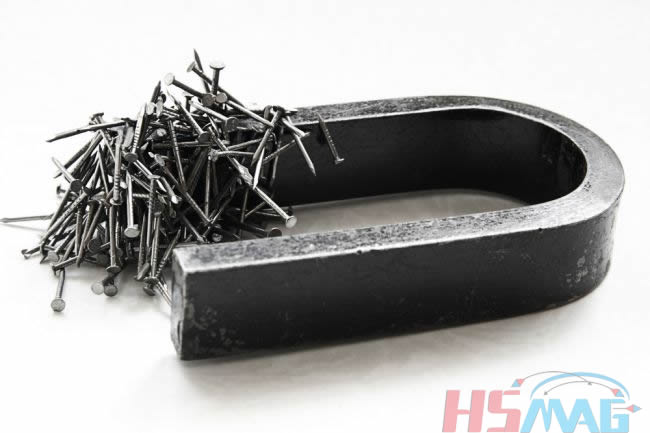 Magnets have been around for centuries. Lodestones were what the first magnets were called. Lode means lead; people used the stones to magnetize compass needles. The discovery of magnetite and the fact that it attracted iron was a cornerstone in the realization of the potential of magnets. The most famous legend of the discovery of the magnet regarded an old shepherd named Magnets. As the story is told, Magnets was herding his sheep one day when the nails in his shoe and the tip of his cane got stuck to the large rock he was standing on. He got stuck to lodestone, which contains magnetite.

Ferromagnets are substances that can be magnetized. These materials, such as iron and nickel, are already heavily attracted to magnets. Materials such as iron and nickel can be magnetized in several ways. They can be heated to certain temperatures, cooled in magnetic fields and hammered. Also, they can be placed in an external magnetic field, which will cause the material to retain some level of magnetism.

The line “f-ing magnets, how do they work?” was coined in 2009 by the hip-hop duo Insane Clown Posse. Magnets aren’t really all that mysterious — the basics have been known for two centuries. As a basic component of disk drives, magnets are part of just about every laptop or desktop computer, and they have made their way into tape players and, of course, the things we use to hold stuff on a fridge. Before the advent of flat screens, televisions and monitors were home to some of the most powerful magnets in the average home.

Although the physics of magnets are pretty well-understood (except perhaps by some hip-hop musicians), and they’ve been part of our lives for centuries, they do surprise and delight. Here’s a look at some fascinating facts about magnets.

Magnets come in four flavors: Ferromagnets — which include substances like iron and nickel — are composed of atoms with unpaired electrons whose spins are aligned. They make good permanent magnets. In another type of magnet — called ferrimagnets — only some of the electron spins are aligned.

Magnetism is light: Why do magnets stick? Magnets attract each other because they exchange photons, or the particles that make up light. But unlike the photons streaming out of a desk lamp or reflecting off of everything you see around you, these photons are virtual, and your eyes (or any particle detector) can’t “see” them. They can, however, exchange momentum, and this is why they stick to things or repel them. When a kid throws a dodge ball, they’re exchanging momentum with the ball, and the thrower feels a slight push back. Meanwhile the target person feels the force of the ball, and (maybe) gets knocked over — they are “repelled” from the thrower. With photons, the process can also happen in reverse, as though one kid reached out and grabbed the ball while the other was still hanging on to it, which would look like an attractive force.

Most of the magnets we use are made of iron (like fridge magnets). But that doesn’t have to be so. Magnets can be made of any material with unpaired electrons. That includes many metals and alloys, such as neodymium, which is used in disk drives. Ferrimagnetic materials, in fact, are often not metals at all. Among them are spinels, which are used in the magnets that seal refrigerator doors.

A similar thing happens when a charged particle moves through a magnetic field, say, near a (permanent) bar magnet . The particle experiences force. But according to the theory of relativity, you can’t say that the particle is moving and the magnet isn’t. From the point of view of the particle, the bar magnet is moving. Maxwell’s equations, which describe electromagnetic waves and forces, show that you’d see different forces, depending on which reference frame you choose. For a stationary observer it looks like a magnetic force pushing or pulling on the particle, and for a moving one it’s an electrostatic force. This problem was a major piece of Einstein’s development of special relativity, which accounted for the discrepancy.