Many electromagnets have an advantage over permanent magnets because they can be easily turned on and off, and increasing or decreasing the amount of electricity flowing around the core can control their strength.

Modern technology relies heavily on electromagnets to store information using magnetic recording devices. When you save data to the hard drive in your computer, for example, tiny, magnetized pieces of metal are embedded onto a disk in a pattern specific to the saved information. This data started life as binary digital computer language (0s and 1s). When you retrieve this information, the pattern is converted into the original binary pattern and translated into a usable form. So what makes this an electromagnet? The current running through the computer’s circuitry magnetizes those tiny bits of metal. This is the same principal used in tape recorders, VCRs and other tape-based media (and yes, some of you still own tape decks and VCRs). This is why magnets can sometimes wreak havoc on the memories of these devices. 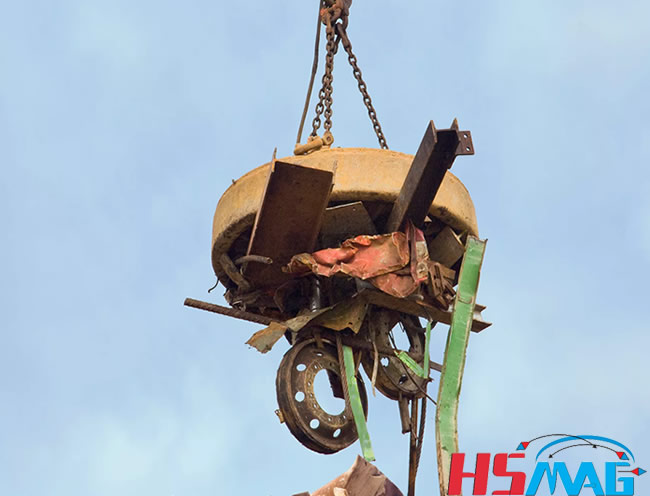 Electromagnets also paved the way for really harnessing the potential of electricity in the first place. In electrical appliances, the motor moves because the current flowing from your wall socket produces a magnetic field. It’s not the electricity itself powering the motor, but the charge created by the magnet. The force of the magnet creates rotational movement, which means they rotate around a fixed point, similar to the way a tire rotates around an axle.

So, why not skip this process and just use the outlet to power the motor in the first place? Because the current required to power an appliance is quite large. Have you ever noticed how turning on a large appliance such as a television or a washing machine can sometimes cause the lights in your home to flicker? This is because the appliance is drawing a lot of energy initially, but that large amount is only needed to get the motor started. Once that happens, this cycle of electromagnetic induction takes over.

From household appliances, we’re moving up to some of the most complex machinery ever built to see how electromagnets are being used to unlock the origins of the universe. Particle accelerators are machines that propel charged particles toward one another at incredibly high speeds in order to observe what happens when they collide. These beams of subatomic particles are very precise and controlling their trajectory is critical so they don’t go off course and damage the machinery. This is where electromagnets come in. The magnets are positioned along the path of the colliding beams, and their magnetism is actually used to control their speed and trajectory.

Not a bad resume for our friend the electromagnet, huh? From something you can create in your garage to operating the tools that scientists and engineers are using to decipher the origins of the universe, electromagnets have a pretty important role in the world around us.

DIY Electromagnets and Experiments to Try

Electromagnets are easy to make; just a few pieces of hardware and a power supply gets you on your way. First, you’ll need the following items:­

one iron nail, at least 6 inches (15 centimeters) in length
a length of 22-gauge insulated copper wire
one D-cell battery
Once you have these items, remove the insulation from each end of the copper wire, just enough to provide a good connection with the battery. Wrap the wire around the nail; the tighter you can wrap it, the more powerful the magnetic field will be. Finally, connect the battery by attaching one end of the wire to the positive terminal and one to the negative terminal (it doesn’t matter which end of the wire gets paired with which terminal). Presto! A working electromagnet.