Electromagnetic radiation is self-sustaining energy with electric and magnetic field components. Electromagnetic radiation is commonly referred to as “light”, EM, EMR, or electromagnetic waves. The waves propagate through a vacuum at the speed of light. The oscillations of the electric and magnetic field components are perpendicular to each other and to the direction in which the wave is moving. The waves may be characterized according to their wavelengths, frequencies, or energy.

Packets or quanta of electromagnetic waves are called photons. Photons have zero rest mass, but they momentum or relativistic mass, so they are still affected by gravity like normal matter. Electromagnetic radiation is emitted any time charged particles are accelerated. 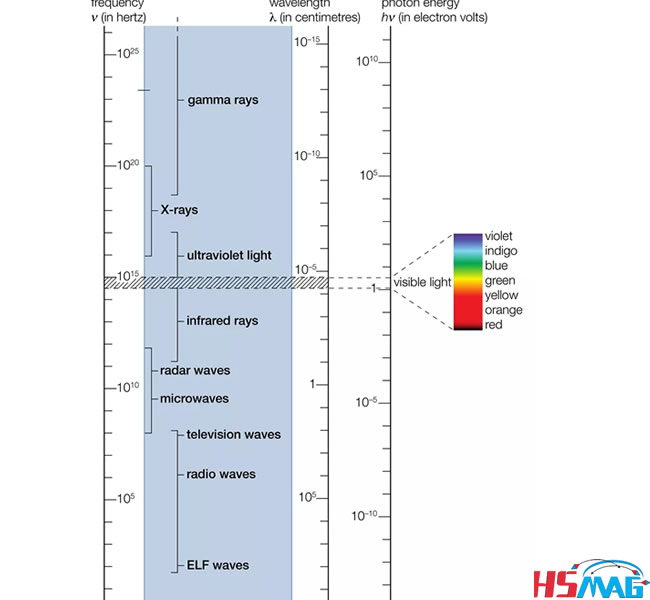 The electromagnetic spectrum encompasses all types of electromagnetic radiation. From the longest wavelength/lowest energy to the shortest wavelength/highest energy, the order of the spectrum is radio, microwave, infrared, visible, ultraviolet, x-ray, and gamma-ray. An easy way to remember the order of the spectrum is to use the mnemonic “Rabbits Mate In Very Unusual eXpensive Gardens.”

Radio waves are emitted by stars and are generated by man to transmit audio data.
Microwave radiation is emitted by stars and galaxies. It’s observed using radio astronomy (which includes microwaves). Humans use it to heat food and transmit data.
Infrared radiation is emitted by warm bodies, including living organisms. It’s also emitted by dust and gases between stars.
The visible spectrum is the tiny portion of the spectrum perceived by human eyes. It’s emitted by stars, lamps, and some chemical reactions.
Ultraviolet radiation is emitted by stars, including the Sun. Health effects of overexposure include sunburns, skin cancer, and cataracts.
Hot gases in the universe emit x-rays. They are generated and used by man for diagnostic imaging.
The Universe emits gamma radiation. It may be harnessed for imaging, similar to how x-rays are used.
Ionizing Versus Non-Ionizing Radiation
Electromagnetic radiation may be categorized as ionizing or non-ionizing radiation. Ionizing radiation has sufficient energy to break chemical bonds and give electrons sufficient energy to escape their atoms, forming ions. Non-ionizing radiation may be absorbed by atoms and molecules. While the radiation may provide activation energy to initiate chemical reactions and break bonds, the energy is too low to allow electron escape or capture. Radiation that is more energetic than ultraviolet light is ionizing. Radiation that is less energetic than ultraviolet light (including visible light) is non-ionizing. Short wavelength ultraviolet light is ionizing.

Wavelengths of light outside the visible spectrum were discovered early in the 19th century. William Herschel described infrared radiation in 1800. Johann Wilhelm Ritter discovered ultraviolet radiation in 1801. Both scientists detected the light using a prism to split sunlight into its component wavelengths. The equations to describe electromagnetic fields were developed by James Clerk Maxwell in 1862-1964. Prior to James Clerk Maxwell’s unified theory of electromagnetism, scientists believed electricity and magnetism were separate forces.