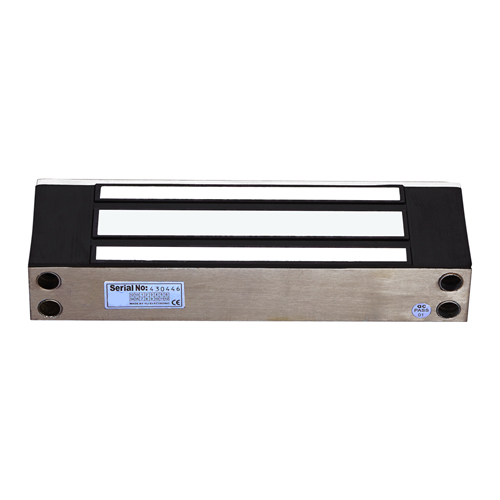 Typical single door electromagnetic locks are offered in both 600 lbs.(272kg) and 1200 lbs. (544kg) dynamic holding force capacities. A “fail safe” magnetic lock requires power to remain locked and typically is not suitable for high security applications because it is possible to disable the lock by disrupting the power supply. Despite this, by adding a magnetic bond sensor to the lock and by using a power supply that includes a battery backup capability, some specialized higher security applications can be implemented. Electromagnetic locks are well suited for use on emergency exit doors that have fire safety applications because they have no moving parts and are therefore less likely to fail than other types of electric locks, such as electric strikes.

The strength of today’s magnetic locks compares well with that of conventional door locks and they cost less than conventional light bulbs to operate. There are additional pieces of release hardware installed in a typical electromagnetic locking system. Since electromagnetic locks do not interact with levers or door knobs on a door, typically a separate release button that cuts the lock power supply is mounted near the door. This button usually has a timer that, once the button is pressed, keeps the lock unlocked for either 15 or 30 seconds in accordance with NFPA fire codes. Additionally a second release is required by fire code. Either a motion sensor or crash bar with internal switch is used to unlock to door on the egress side of the door automatically.

The first modern direct-pull electromagnetic lock was designed by Sumner “Irving” Saphirstein in 1969 for initial installation on doors at the Montreal Forum. Fire concerns by local authorities in locking the doors at the Forum prompted management to find a locking solution that would be safe during a fire incident. Saphirstein initially proposed to use a linear stack of door holders to work as an electromagnetic lock. These door holders were traditionally used to hold doors open, but in this application Saphirstein believed that they could be packaged and adapted to work as a fail-safe lock. After a successful prototype and installation at the Forum, Saphirstein continued evolving and improving the design and established the Locknetics company to develop accessories and control circuits for electromagnetic locks.

Under difficult business conditions, Locknetics was later sold to the Ives Door Hardware company and later, resold to the Harrow company.[citation needed] Much later this division was then again sold to Ingersoll Rand Security Technologies. The division was recently closed and transferred to other divisions within Ingersoll Rand Security. Employees that were associated with activities at Locknetics, went on to form other electromagnetic lock companies, including Dynalock Corporation and Security Engineering Co.

Saphirstein continued developing electromagnetic locking technologies at other companies he initiated including Dortronics (later purchased by Sag Harbor Industries), Delta Controls (first purchased by the Lori Lock Company and then later purchased by Hanchett Entry Systems) and Delt-Rex Door Controls, all of which were located in Connecticut. Other engineers also left these companies to form their own manufacturing firms in electronic locking, including Highpower Security Products LLC in Meriden, Connecticut. Many other firms in both the U.S., Canada, and throughout Asia were later established to create additional product offerings for the direct-pull electromagnetic lock.

The principle behind an electromagnetic lock is the use of electromagnetism to lock a door when energized. The holding force should be collinear with the load, and the lock and armature plate should be face-to-face to achieve optimal operation.

The magnetic lock relies upon some of the basic concepts of electromagnetism. Essentially it consists of an electromagnet attracting a conductor with a force large enough to prevent the door from being opened. In a more detailed examination, the device makes use of the fact that a current through one or more loops of wire (known as a solenoid) produces a magnetic field. This works in free space, but if the solenoid is wrapped around a ferromagnetic core such as soft iron the effect of the field is greatly amplified. This is because the internal magnetic domains of the material align with each other to greatly enhance the magnetic flux density.

Magnetic locks possess a number of advantages over conventional locks and electric strikes. For example, their durability and quick operation can make them valuable in a high-traffic office environment where electronic authentication is necessary.

Requires a constant power source in order to be secure.
Can de-energize in the event of a power outage, disabling security.
Expensive in comparison to mechanical locks.
Requires additional hardware for safe operation.

The magnetic lock is suitable for both in-swinging and out-swinging doors. Brackets (L bracket, LZ bracket, U bracket) are used to orient the armature for use with both applications. Filler plates are also used to provide a large, flat mounting area on the door frame when the electromagnet is larger than the available mounting space on the door frame due to the frame’s geometry. 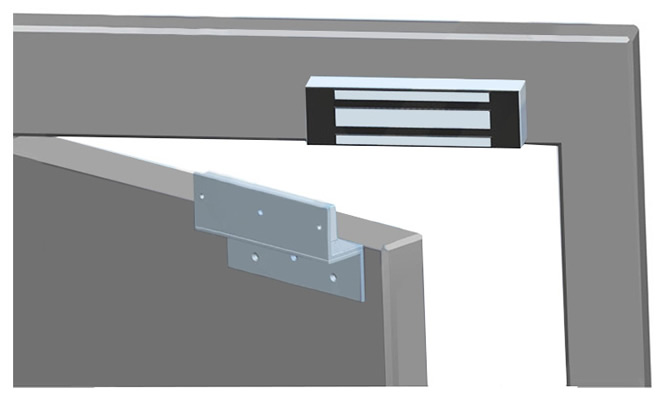 The magnetic lock should always be installed on the secure side of the door. Most installations are surface mounted. For safety, magnetic lock, cables, and wires should be routed through the door frame or flush mount with wire moulding.

Installation is straightforward. With in-swinging applications, the electromagnet is typically installed in the opening corner of the door at the door’s header. Maglocks can also be installed vertically in the door opening when they are furnished with a full length housing. With this configuration the armature is through-bolted through the door and oriented to mate with the face of the electromagnet. The armature plate and electromagnet must touch in order to provide locking holding force.

Magnetic locks are almost always part of a complete electronic security system. Such a system may simply consist of an attached keycard reader or may be more complex, involving connection to a central computer that monitors the building’s security. Whatever the choice of locking system, fire safety is an important consideration.

Other variations and improvements on the electromagnetic locks have been developed. The most remarkable is the shear lock, where the armature does not directly pull off the face, but the load is instead in shear, like a mechanical stop. The shear magnetic lock allows a door to swing in both directions, as opposed to the original (and now ubiquitous) direct pull type, which normally works either in an in-swing or out-swing configuration. In order to provide the shear magnetic lock with the appropriate holding force, then two pins lock the armature onto the magnet itself, and ensure that the magnet locks into place.

A magnetic lock has a metal plate surrounded by a coil of wire that can be magnetized. The number of coils determines the holding force which characterizes the lock:

The standard size electromagnetic lock is used as a gate lock.

The power for an electromagnet lock is DC (Direct Current), around 5-6 W. The current is around 0.5 A when the voltage supply is 12VDC and .25A when using 24VDC (keeping in mind that each manufacturer is different and if there are one or two coils in the block). Also this information varies based upon the origins of the product. It is also suggested that you verify that the magnetic lock carries the UL mark. Generally, the specification of the electromagnet lock is dual voltage of 12/24 VDC. If using a rectifier to convert AC power, you must use a full wave bridge rectifier.

For safety purposes, electric locks and electric strikes can be designed to operate in one of two modes:

An electromagnet lock is ONLY Fail-Safe, so it must satisfy applicable fire regulations so as to be safe in emergency situations. 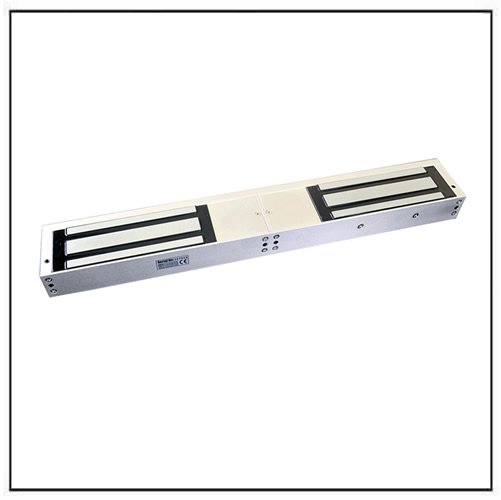 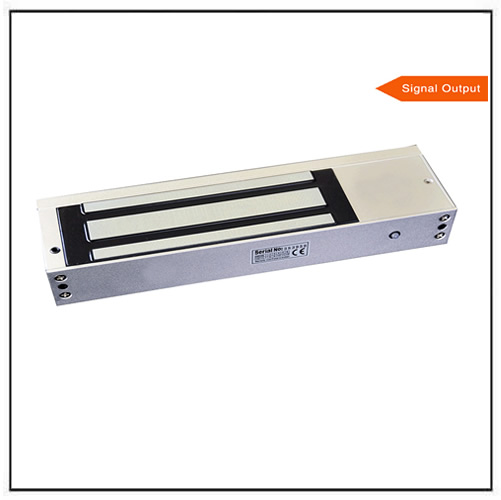 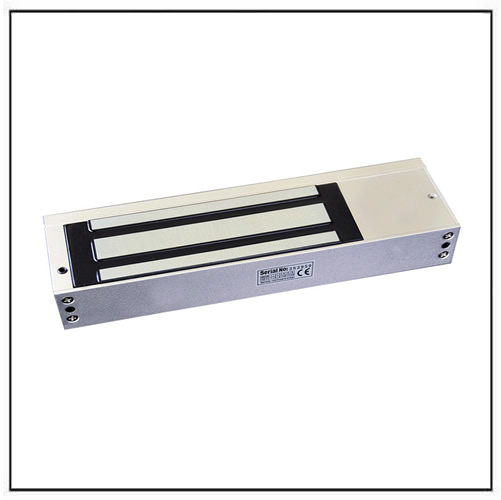 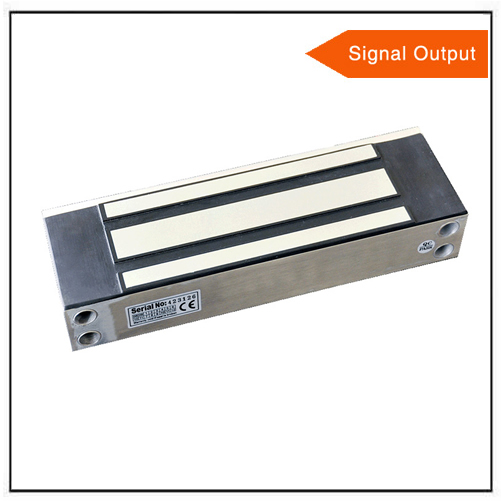 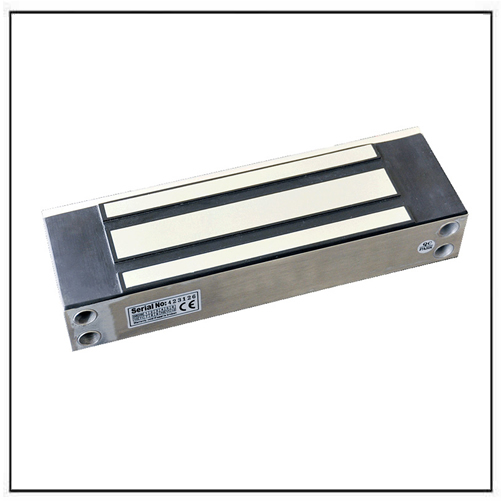 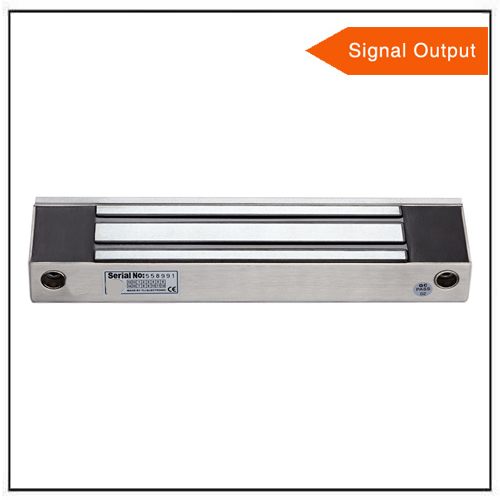 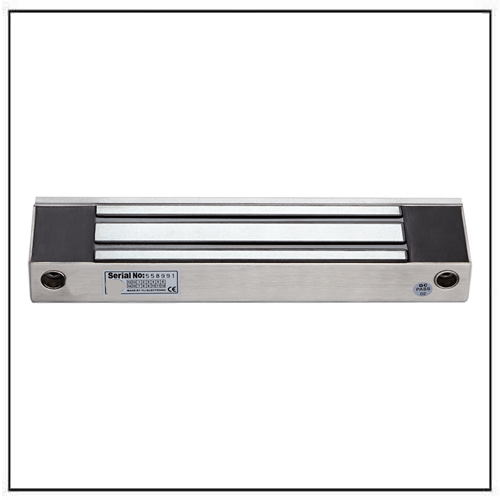 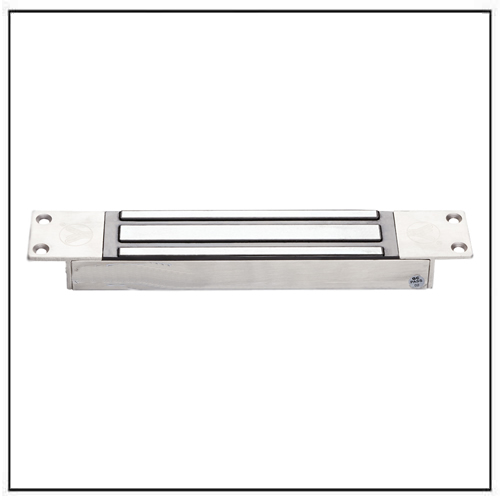 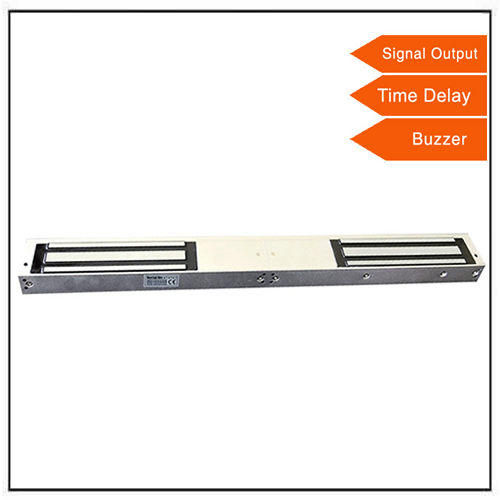 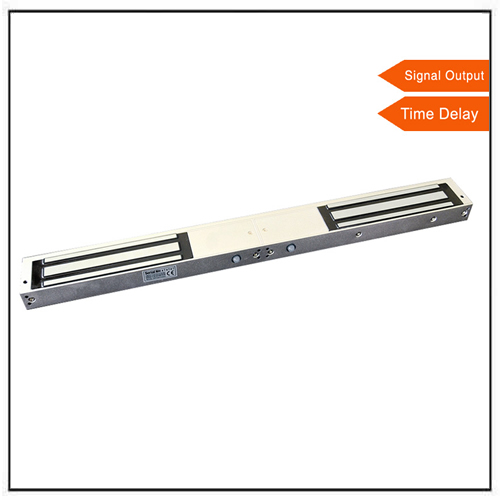