CHINA’s “dual-carbon” strategy advocates a green, environmentally friendly, and low-carbon lifestyle, which depends on the continuous development and innovation of green energy technologies. At the moment when our country is vigorously developing renewable energy, the recovery and reuse of micro-energy such as magnetic energy in the real environment has attracted the attention of many researchers.

Chu Zhaoqiang, a young teacher and associate professor of the “Ocean Magnetic Sensor and Detection” team of the School of Hydroacoustic Engineering of Harbin Engineering University and the innovation and development base, researched and designed a new type of weak magnetic energy harvester structure, which can save IoT sensors from various manual tasks such as battery replacement and maintenance. The cumbersome operation realizes “self-generation” under the condition of weak magnetic field, and its output power is about 120% higher than that of the traditional magnetic energy collection structure. Recently, the research paper “Significantly Enhanced Weak Magnetic Energy Recovery Performance in Magnetic-Force-Electric Energy Harvesting Devices Clamped at Both Ends” was published online in the internationally renowned journal “Advanced Energy Materials” in the field of energy materials.

Recycling and reusing micro energy in the environment 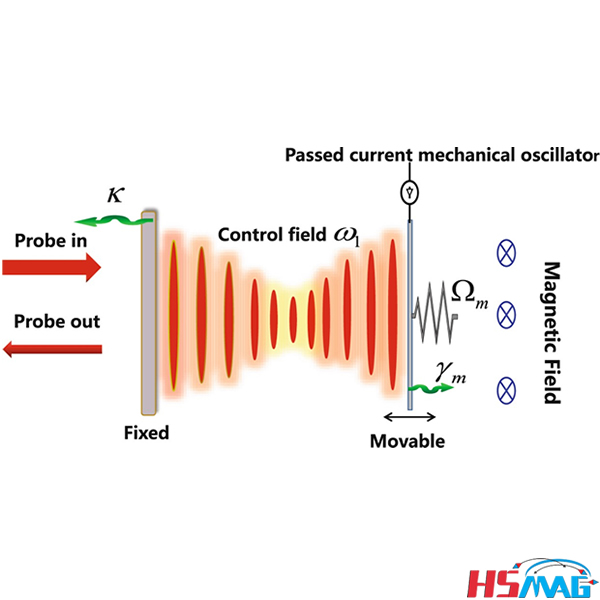 It can be said that the development of distributed energy acquisition technology to realize the recycling and reuse of micro energy in the environment is of great value, and it is also an effective measure to respond to the national energy conservation and emission reduction strategy and help carbon peak.

For the recovery and utilization of environmental micro-energy, among many collectible energy sources such as vibration energy, radiation energy and near-field electromagnetic energy, the stray magnetic energy generated by power cables, industrial machinery and household appliances is more powerful than wind energy due to its fixed frequency and wide distribution. Low-frequency energy harvesting is more efficient and has been the focus of researchers. Especially in the context of building a smart grid, online monitoring and fault diagnosis of transmission line status parameters urgently need to capture energy from overhead cables to build a sustainable self-powered sensor network.

Just like the brave new world described in the novel “The Three-Body Problem”, the cup needs no power supply or battery, and can be self-heated. A wireless power supply field formed by using microwaves or other forms of electromagnetic oscillation to generate electricity. This technology is actually the technology currently used for wireless charging of mobile phones. Initially, people also turned their attention to this traditional coil-type induction power-taking device. However, this technology has outstanding problems such as large size, inconvenient installation, and difficulty in withstanding short-term high-current shocks.

Therefore, people began to study an energy harvesting device that converts magnetic energy into mechanical energy and then into electrical energy (MME). This technology is expected to become a new option for the next generation of low-frequency magnetic field energy harvesting.

According to Chu Zhaoqiang, this new type of energy harvesting device uses the magnetic torque effect and the hysteresis stretching effect, and then uses the piezoelectric effect to realize the conversion between mechanical energy and electrical energy. , and can achieve higher efficiency energy conversion and higher tolerance to strong current pulses.

Chu Zhaoqiang has been in contact with the energy harvesting technology of vibration and magnetic field since 2016. From 2016 to 2021, he has been committed to the research of materials and devices based on traditional cantilever beam resonant structures. This is an energy harvester structure in which one end is fixed and the other end is free, and a mass block (magnet) is attached to the free end. In this structure, the driving torque is provided by the free-end magnetic mass while contributing more than 90% of the equivalent mass. In this case, if the resonant frequency of 50 Hertz (Hz) of the resonator is to be kept unchanged, it is difficult to enhance the magnetic-mechanical coupling performance simply by increasing the mass of the free-end magnet. It is also for this reason that most of the cantilever-type magnetic-electromechanical-electric devices studied at present are limited to the energy harvesting of strong magnetic fields, that is, magnetic fields greater than 5 Oersted (Oe). The World Health Organization points out that the safety threshold of 50/60Hz alternating magnetic field accessible to the public is 1Oe, and the stray magnetic field in the environment is generally lower than this reference value. Therefore, it is also necessary to explore new principles and methods suitable for low-field energy harvesting.

Based on the thinking of “how the magnetic-mechanical-electrical energy harvesting device can reduce the equivalent mass of the free-end magnetic mass”, Chu Zhaoqiang boldly innovated and proposed a design idea of clamping beams at both ends. This design fixes both ends of the magnetic-mechanical-electrical energy harvesting device, adopts a second-order vibration mode, and reduces the kinetic energy of the central magnetic mass, thereby reducing its contribution to the equivalent mass of the resonant system. In the case of increasing the volume of the magnet, the output performance of the system under the condition of 50Hz weak field is greatly improved.

Experiments have shown that under the same excitation conditions in a weak magnetic environment, the energy harvester can output more than twice the electric energy of the traditional cantilever beam structure in the same unit time, which can completely make the sensor without a battery work normally and communicate with the mobile phone. The terminal is connected for communication.

Chu Zhaoqiang said: “In scientific research, it is often a small, even inconspicuous design method that plays a key role. But the source of this method must be based on long-term research and thinking.”

In the future, it may be used for small underwater bionic platforms

“Currently, the application of this energy harvesting technology for magnetic fields still has certain limitations. Science always solves a problem and brings many new problems.” Chu Zhaoqiang told the Science and Technology Daily reporter that in the future, he will The main consideration is to further optimize the parameter design of the magnetic-mechanical-electrical energy harvesting device clamped at both ends in terms of materials and geometry, and further realize the integration of increasing the adaptable magnetic field variation range and miniaturization. Applications such as substation intelligent perception and power distribution network topology relationship recognition provide key technologies.

At the same time, Chu Zhaoqiang said that the team will combine the unique advantages of Harbin Engineering University’s ship and sea research to conduct in-depth research on wireless energy supply technologies based on ultrasound and magnetic fields for small underwater bionic platforms such as underwater robotic fish and unmanned underwater vehicles. The problem of energy “take” such as bionic platforms, while solving the problem of energy “supply”.

The “Ocean Magnetic Sensor and Detection” team of the School of Hydroacoustics and Innovation and Development Base of Harbin Engineering University where Chu Zhaoqiang works was established in 2017 and has continued to grow and develop. Researches on basic magnetic materials, development of magnetic sensors, and underwater information perception and processing have been carried.