“Doctor, the child has eaten the magnet, what should I do?” On the morning of May 18, a mother and child came to the Hengjie Town Health Center in Haishu District of Ningbo City. The 7-year-old child accidentally swallowed the magnet.

It turned out that the day before, when the child was playing, he accidentally swallowed an oval magnet. The child was very worried and immediately told the parents. However, the child’s stomach is not painful or itchy, and there is no reaction. The oval magnet is smooth, will it come out by itself? The family waited anxiously all night, but the child was not discharged. Is the magnet still in the stomach? Early the next morning, the mother hurried to the hospital with the child. After careful examination by a radiologist, it was found that there was indeed an oval metal foreign body about 3 cm long in the child’s right lower abdominal intestine. 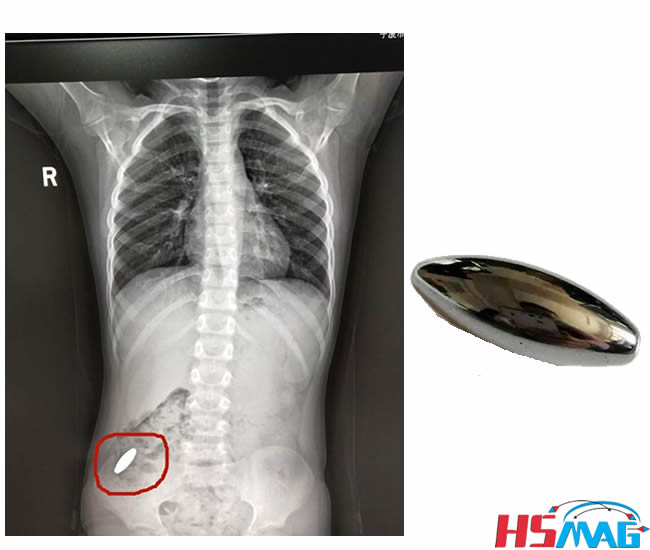 A radiograph showed that the magnet was still in the child’s stomach. Since the child had no symptoms at the time, the doctor reassured the child and his family members that most of the swallowed foreign bodies could be excreted through feces. It is recommended that children eat more leeks and celery rich in fiber, or eat more bananas to promote intestinal peristalsis. Pay attention to observe the child’s feces every day. Generally, the foreign body will be excreted with the feces within 3 days, which means that the child is safe. If it is not excreted, it must be admitted to the hospital for reexamination.

On the first day back home, the doctor called back and found that the child was normal and the magnet did not come out. The doctor suggested that children should drink more sesame oil. On the morning of May 20th, the child’s mother happily called and said that the magnet had really come out after drinking the sesame oil, and the doctors in the Hengjie Town Health Center also breathed a sigh of relief. The child swallowed such a magnet, and the child’s mother said that she could buy it in a toy store.

The doctor reminded that because children are curious or play with toys, swallowing foreign objects occurs from time to time. Parents must take good care of their children and keep them away from small and easy-to-swallow objects such as coins and marbles.