Magnets and microphones play huge roles in our everyday lives. You may have read somewhere that magnets play a central role in microphones. Is this true?

Do Microphones Need Magnetism To Work Properly? Dynamic mics (moving-coil and ribbon) convert energy via electromagnetic induction and have built-in magnets around their diaphragms. Additionally, any mic with a transformer also requires magnets to function as designed. Transformerless FET condenser mics, conversely, do not require magnetism.

So the answer is sometimes yes and sometimes no. It really depends on the microphone in question. In this article, we’ll discuss why some microphones need magnetism and why some others do not. I’ll share mic examples to help illustrate. 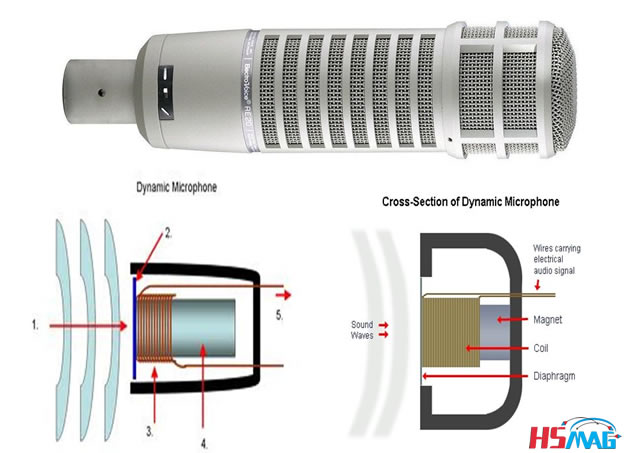 Magnetism And The Dynamic Microphone Transducer

Dynamic microphone transducers have permanent magnets built into their cartridges or baffle. These magnets provide the magnetic field required for electromagnetic induction.

Dynamic mics, like all other microphones, have diaphragms that move according to sound waves. The diaphragms of dynamic microphones contain the electrically conductive material required for electromagnetic induction.

As the diaphragm of the dynamic mic moves with varying sound pressure, so too does the conductive material.

In other words, the magnetic field is permanent, but the diaphragm experiences it differently depending on its position within the field.

So then, the electrical conductor experienced a changing magnetic field. There, electromagnetic induction happens, and a voltage is created across the conductor.

Because the diaphragm moves back and forth (in alternating directions), this induced voltage is AC.

Ultimately, this AC voltage is our microphone audio signal!

As promised, let’s talk about the moving-coil dynamic mic and the ribbon dynamic mic.

The moving-coil dynamic microphone has a non-conductive diaphragm membrane. However, this diaphragm has an attached conductive coil (typically copper) that sits within a cylindrical slot in a magnetic structure.

A simple diagram of the moving-coil mic transducer is shown below:

Moving-Coil Dynamic Mic Transducer Elements
The diaphragm and attached conductive coil move according to the sound waves they are subjected to. This movement happens within a permanent magnetic field, and so a voltage (mic signal) is induced across the conductive coil.

The Ribbon Dynamic Mic Transducer
The diaphragm of a ribbon microphone is itself the conductor (often made of aluminum). It sits in a permanent magnetic structure known as a “baffle.”

The conductive ribbon diaphragm moves back and forth about its resting position according to the sound waves it encounters. It does so within a magnetic field, and so an AC voltage (mic signal) is induced across it.

Magnetism And The Transformer
In addition to all dynamic microphones, any mic with a transformer, by default, requires magnetism to work.

What is a transformer? A transformer is a passive electrical device that uses electromagnetic induction to change the voltage, current, and impedance of a primary circuit and introduce these changes in a secondary circuit. It does so without electrically connecting the two circuits.

Transformers are made from a single magnetic core and two (or more) conductive windings that wrap around the core without touching one another. In microphones, the transformers are fairly basic and typically only have windings.

These two windings are known as:

Step-Up Transformer
In microphones, transformers are often put at the microphone output. These mics are referred to as having “transformer-coupled outputs.”

Depending on the microphone design, these transformers could be step-up or step-down transformers.

Step-Up Transformer
Step-up transformers increase or “step up” the voltage between the primary and secondary winding while decreasing the current. The impedance is also stepped up in a step-up transformer. Rectangular Lamination Permanent Magnet Transformer Core for Motor

Transformer Turns Ratios
To wrap up our brief discussion on transformers, let’s talk about the equations of the turns ratios. EC Type Transformer Soft Ferrite Core

As mentioned, the transformer has a magnetic core (which is why we’re discussing it in this article). Wrapped around this magnetic core are coils of conductive wire. One coil is the primary winding, and the other is the secondary winding. EI MnZn Ferrite Power Transformer Core