But what is less known is that there are materials that are REPELLED by a magnetic field. In fact, almost everything is diamagnetic. The only reason you don’t see things flying away from magnets every day is that the diamagnetic effect is millions times weaker. It’s only recently that permanent magnets have been strong enough to show this effect. 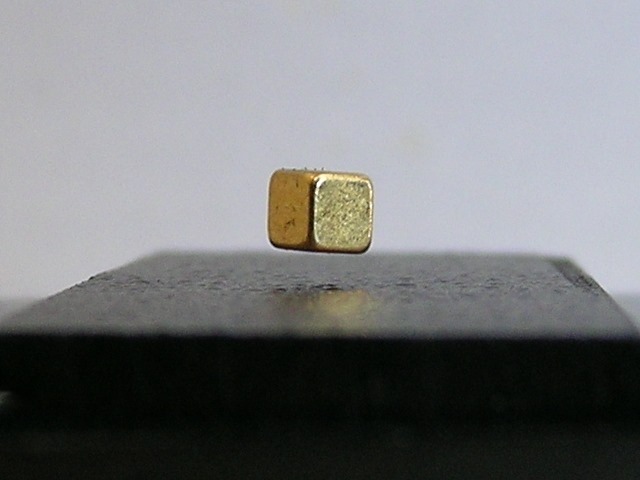 Water is diamagnetic, but weakly. Materials that show strong diamagnetic effects are bismuth, silver and graphite. You can actually levitate water if you have a strong enough magnetic field. Strong enough means a $20 million superconducting electromagnet.

This is my home made magnetic levitation frame. I use a non-magnetic threaded rod that lets me adjust the height of the three lifter magnets in sub-milimeter increments.
The large square block is a piece of carbon-graphite. The rectangle of dark gray material sitting on top of it is called pyrolytic graphite. It is graphite that has been deposited at extremely high temperatures and results in a focused diamagnetic field in one axis. It has about 3 times the lifting power than plain graphite. 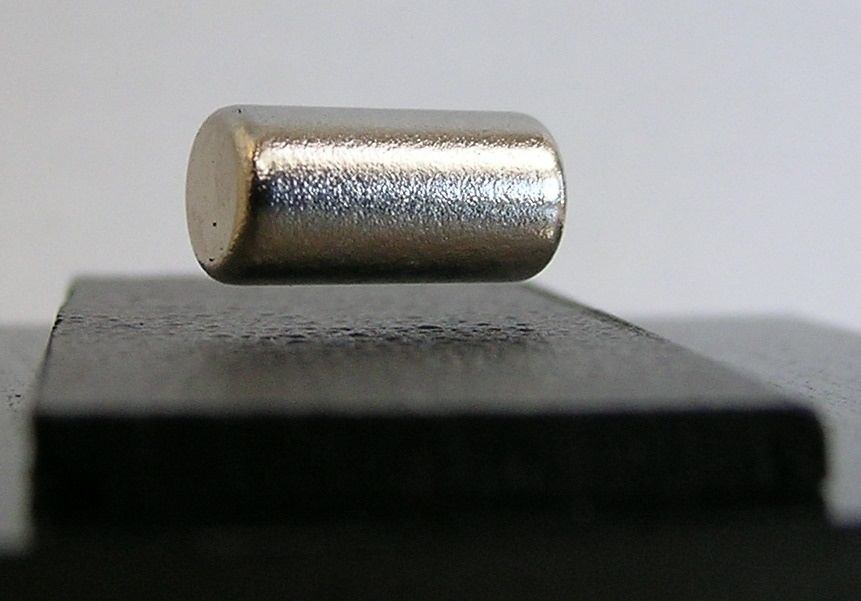 Below are various magnets I have levitated. Usually two peices of diamagnetic material are used, but I prefer the way it looks with only the bottom piece, even though it is harder and does not float as high. 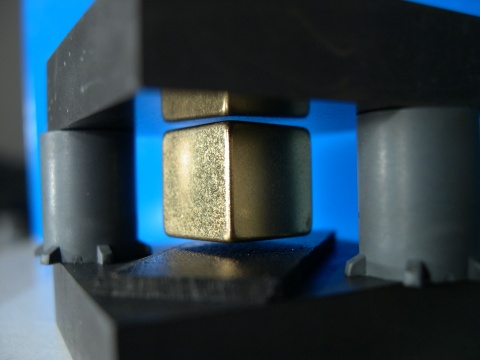 A 1/2 inch cube. This is ALMOST too big to float.
At this size, the mass of the magnet is nearly too much to be repelled by the graphite.

These are two magnets spinning freely above graphite blocks. The shiny surface is tin foil placed there to make the floating more visible.
This shows several magnets floating between blocks of graphite. The upper graphite allows them float high and be much more stable, no longer ready to fly off the surface and up into the lifter magnet.
An array of magnets with the north and south poles alternating and facing up provide a good platform to repel bits of graphite.
This shows Lenz Law in action. Conductive materials moving past a magnetic field will slow down due to the currents induced. You can see the vast diffrence between various alloys by seeing how the quarters and nickels act as they fall past the magnets. 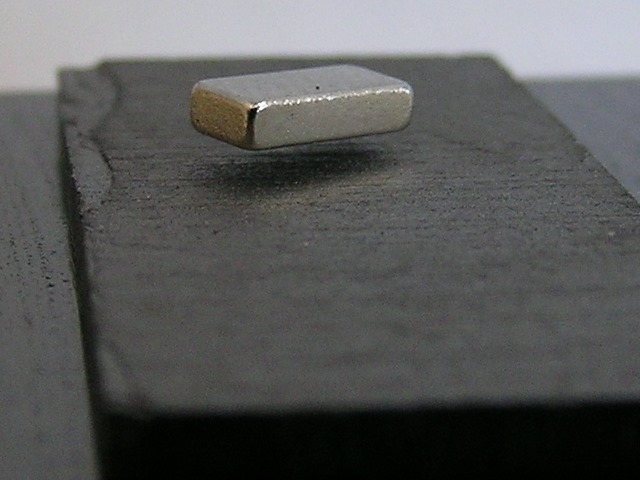 The next set are small squares of pyrolytic graphite floating in a magnetic field produced by an array of 1/2″ magnets. Making a 2x2x2 cube of eight of these levitated the graphite the highest. Using a 3×3 set doesn’t levitate higher than a 2×2 but is much more stable. The graphite on the 2×2 magnets tends to fall off easily, while the 3×3’s keep them centered even when handling them.

The magnets are arranged so the poles are facing up.
This concentrates the magnetic flux lines.
It’s difficult to force stong magnets to do this,
they want to line up all in a row. 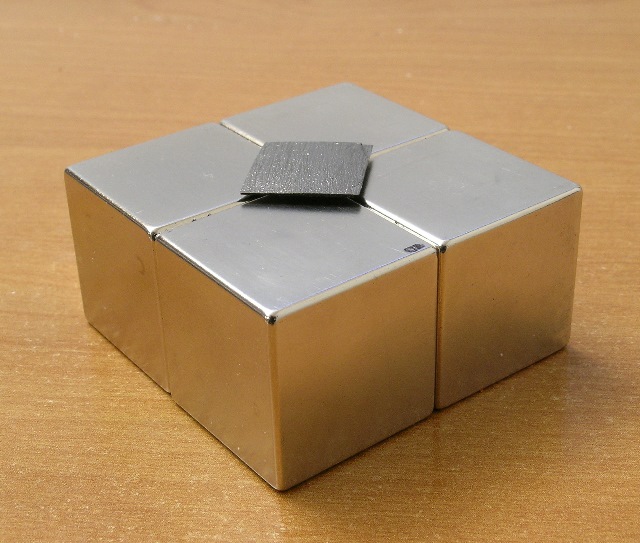 This was an experiment using four one inch magnets. These monsters are dangerously strong and can not simply be put together by hand. I had to build special clamps and sliders to put them in the correct configuration without them snapping together and shattering. Or taking off a finger.
I was dissapointed by the lifting power they produced. It seems that you are better off with a dense array like the 3×3 and 2×2 arrays above. I suspect an array of long, thin magnets would produce good results.

The second image shows a silicon chip resting on the graphite as it floats.
The third is a bit of non-magnetic metal.

Here I am using a number of 1/4 inch cubes. Adding more does not increase lift any. Making a large flat grid is fun as you cen send bits of the graphite floating along in odd patterns as it winds its way though the magnetic fields.
Getting greater height requires more field density. That is a tough job, as a magnetic field drops off at the cube root with distance, so even stacking two layers of magnets is unlikely to do much. The stacks here are most likely adding nothing but looks. In addition, since they are colums of seperate magnets and not one long one, the field gets diverted and only part makes it to the top surface to provide lift.