DEMETER – European Training Network for the Design and Recycling of Rare-Earth Permanent Magnet Motors and Generators in Hybrid and Full Electric Vehicles
In 2010 the European Commission (EC) published a milestone report on Critical Raw Materials (CRM) for the EU, in response to the awareness of a supply risk for many raw materials. The rare-earth elements (REEs) were considered to be by far the most problematic. In 2011, the rare-earth crisis came to its peak with a more than tenfold increase in prices of light rare earths (LREEs) and heavy rare earths (HREEs). In 2014 the EC published an update of its CRM report, in which the concern about Europe being able to secure reliable, sustainable and undistorted access to raw materials was repeated. Of the 54 materials under investigation, the HREEs and LREEs were, once more, identified as having the greatest supply risk, with 99% of HREEs and 87% of LREEs being imported from China. The REE magnet industry consumes the major part of the LREEs neodymium (Nd) and praseodymium (Pr), while it consumes practically all of the produced HREE dysprosium (Dy). This makes the REE magnet industry and the various downstream sectors that utilise these magnets in their products and services extremely vulnerable to price fluctuations and shortages. The automotive sector is likely to become the main consumer of REE magnets in Europe, as it moves towards more Hybrid Electric Vehicles (HEVs) and Full Electric Vehicles (EVs). Furthermore, REE magnets are used in a diverse range of bulk applications incl. aerospace (wing flaps and generators), the medical sector (MRI scanners), metal processing (magnetic separators) and renewable energy technologies (wind turbines). 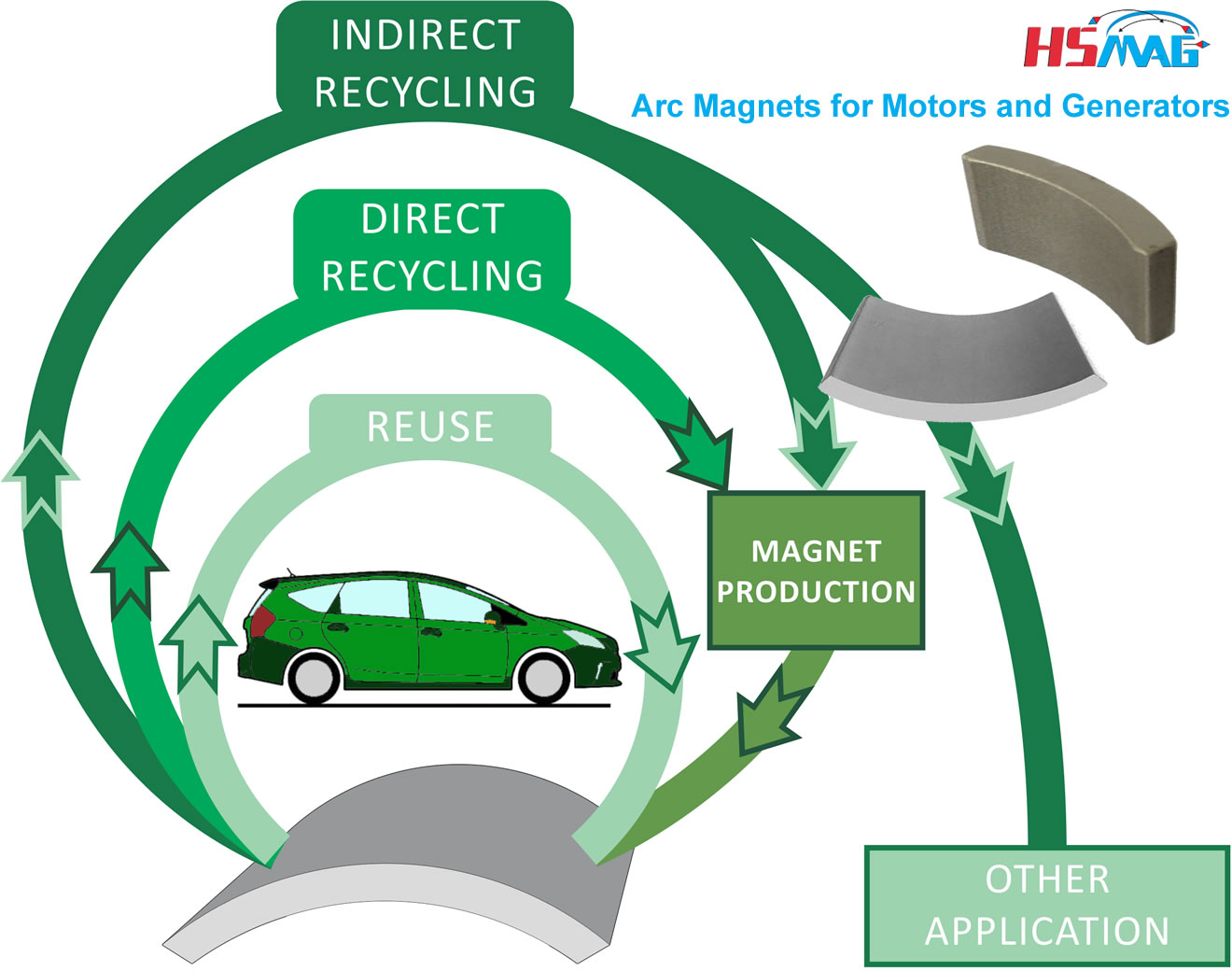 During the rare-earth crisis of 2011, three possible solutions were investigated to alleviate the shortages; (1) increased recycling rates of REE-containing devices; (2) the search for new, mineable REE resources outside China, and; (3) the development of REE-free strong permanent magnets (“substitution”). Although Europe has access to some REE deposits, for instance Norra Kärr (Sweden) and Kvanefjeld (Greenland), these mining projects are still at an exploratory stage and it will take many years before these mines become operational. Secondly, the development of new REE-free permanent magnets requires a scientific breakthrough that has not come about, despite decades of research, not only in Europe, but around the world. Therefore, of the three potential options, only the first is likely to succeed from the European perspective on the short to medium term.

As has been highlighted in the recommendations for policy makers in the final report of the European Rare Earths Competency Network (ERECON), recycling of REE permanent magnets from motors and generators contained in vehicles, especially in Hybrid and Full Electric Vehicles, should receive top priority. 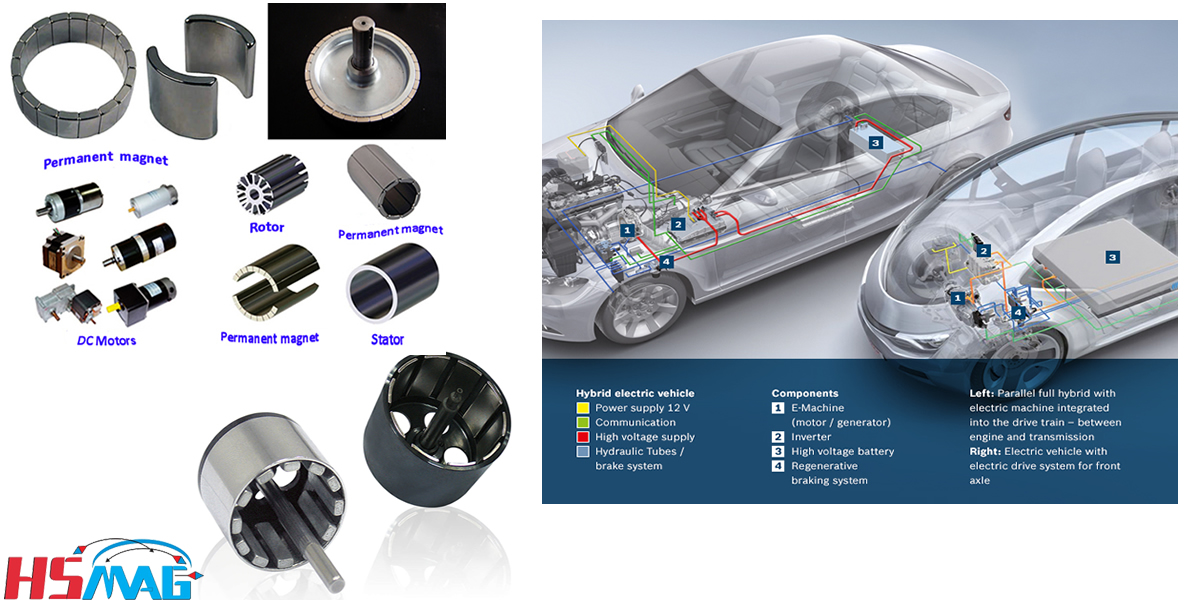 Concurrently, in the recently published report of the European Rare Earth Competency Network (ERECON), which was set up under the auspices of DG Enterprise and Industry to lower the REE supply risk for the EU, it is pointed out that research focusing on the REE permanent magnets used in e-mobility should receive top priority with drive motors, power steering, stop-start motors, and regenerative braking generators being highlighted in particular. Combining the EU needs and the ERECON “call-for-arms”, DEMETER, therefore, focuses on solutions for the large quantities of REE permanent magnets that are used in the motors and generators of (H)EVs, for which at present there is no clear pathway for reclaiming the REE magnets when they reach their End-of-Life (Table 1).

REE magnets in regular cars and (H)EVs. Mass-produced REE permanent magnets are either neodymium-iron-boron (NdFeB) or samarium-cobalt (SmCo) magnets. The REE magnet market is dominated by NdFeB magnets (> 95% of the market volume). Nevertheless, SmCo type magnets can be used at much higher temperatures than NdFeB magnets and have a much better resistance to corrosion, making them attractive for application in drive motors of (H)EVs. As shown in Table 1, current (H)EVs make use of a diversity of small magnet devices (<30 g of alloy per device) and, more importantly, medium to large motors and generators, with the weight varying from 30 g up to 1.5 kg of NdFeB or SmCo, depending on the application. Apart from the heaviest permanent magnet motor, i.e. the drive motor, these motor and generator systems are also increasingly used in the most advanced Internal Combustion Engine Vehicles (ICEVs), in the effort to reduce the eco-impact of cars. As such the distinction between HEVs and Advanced ICEVs is not as often thought. Overall aim DEMETER. The project focuses on the recovery of large (i.e. > 30 g) REE permanent magnets in the drive motor, the power-steering motor, the stop-start motor, and the regenerative braking and range extender generators in (H)EVs and in highly Advanced ICEVs. There are three options with respect to the recovery of these devices. The first option is direct re-use: magnets could be removed from EoL motors/generators and used again in new motors/generators. This is, however, not a realistic option at present, as the magnets in the current (H)EVs were never designed to be removed and are often difficult to extract. In DEMETER the first aim is to develop strategies based on Design-for-Reuse with new generations of motors/generators that incorporate standard sizes of magnets that can be easily removed for re-use in new (H)EVs (and Advanced ICEVs). The second option is direct recycling, in which case the magnets are treated as a raw material for the production of new magnets, but using novel techniques such as hydrogen decrepitation processing, plasma/strip casting, and spark plasma sintering, to give new, ready-to-use, magnetic materials or a new master alloy that can be processed using existing magnet production facilities. The last option is indirect recycling. In contrast with the alloy route in direct recycling, indirect recycling implies that the magnet scrap material is transformed to its elemental components. The REEs are recovered from the magnets and separated from each other for use in subsequent permanent magnet production or, possibly, in other existing or new applications such as magnetocaloric materials or lamp phosphors. In DEMETER, not only NdFeB magnets, but also SmCo magnets are considered, as many magnet experts believe that SmCo is the better choice in certain motor applications. 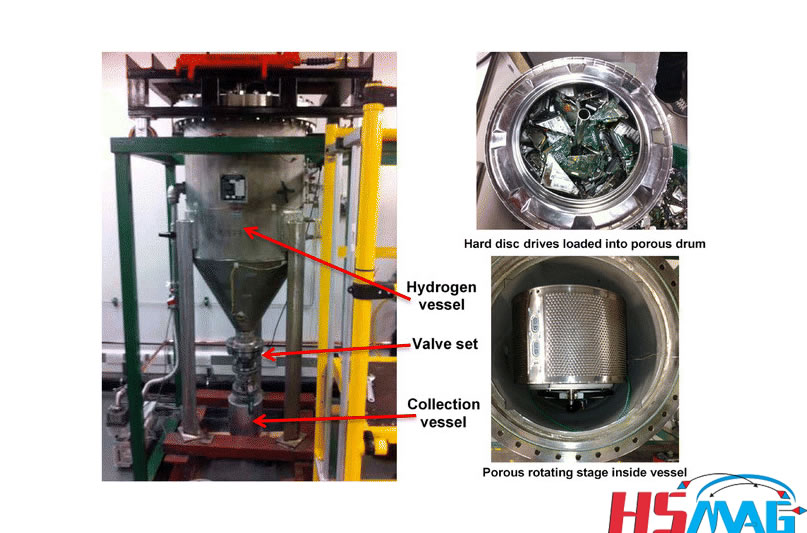 DEMETER’s specific objectives. DEMETER’s science and technology (S/T) objectives are to:
Develop innovative, eco-efficient direct and indirect recycling routes of NdFeB and SmCo magnets motors and generators from End-of-Life (H)EVs and Advanced ICEVs;
Develop innovative processing techniques for production of high performance NdFeB and SmCo magnets;
Design electric motors and generators for the next generation of (H)EVs and Advanced ICEVs to enable easy future reuse of NdFeB and SmCo magnets;
Develop a complete, “(urban) mine-to-machine”, lifecycle assessment (LCA) and lifecycle costing (LCC) methodology for REE permanent magnets to ensure the most environmentally-friendly and economical routes are applied for recycling. 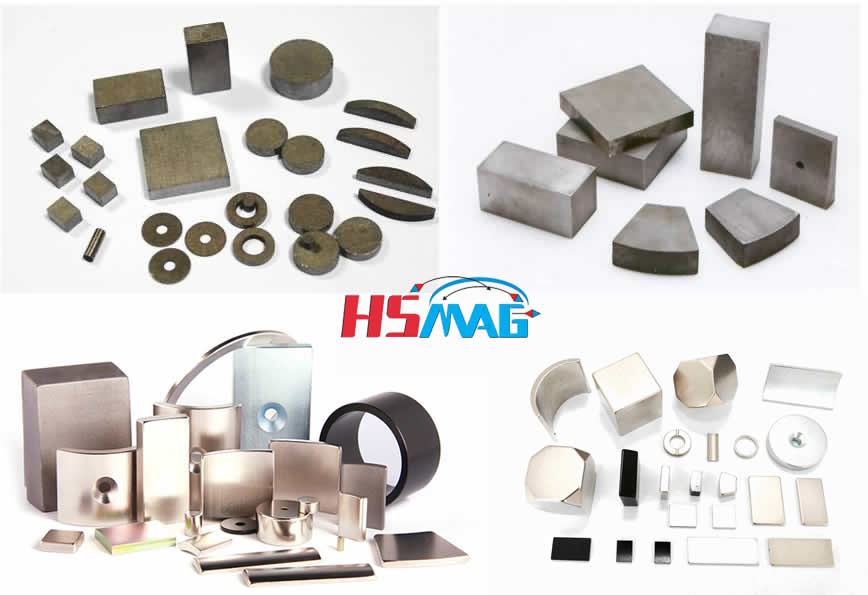 NdFeB magnets are based on the Nd2Fe14B alloy. Smaller amounts of heavy rare earths and other metals (Co, Cu, Al, Nb, …) are sometimes added to NdFeB magnets to fine tune their characteristics. The most important additive is dysprosium (Dy), which improves the resistance to demagnetisation (coercivity) and, hence, allows the magnet to be used at higher temperatures. Up to 11 wt% dysprosium is added to NdFeB magnets in high temperature applications such as electric engines or turbines. The magnetic strength of NdFeB magnets, measured in terms of their energy product, can be as high as 470 kJ/m3, close to the theoretical maximum of 512 kJ/m3. SmCo magnets are based on SmCo5 or Sm2Co17 alloys. The energy product of SmCo magnets varies between 128 kJ/m3 to 264 kJ/m3, while their theoretical limit is about 272 kJ/m3.