Capacitors are often used as noise suppression components. But they are not always the optimal solution because they discharge the noise to the ground. Ferrite cores, however, can suppress noise without grounding.

Ferrites have the ability to attract magnetic flux. Hence, when a cable is passed through a ferrite core, it creates a concentrated magnetic field inside the core, which is eventually converted to heat. This heat gets dissipated along with the magnetic loss of the ferrite, which prevents noise emission. That is how ferrite cores can suppress noise without grounding.

Ferrite cores or ferrite beads are also used in case electromagnetic and radio frequency energies interfere with low-level signals. They dissipate high-frequency energies as minute levels of heat energy and, depending on the nature and frequency of the interference, redirect the EMI/RFI signals back down the cable, away from the devices. For long HDMI and digital cable runs, where the wire passes through areas of strong interference, ferrite cores are effective. 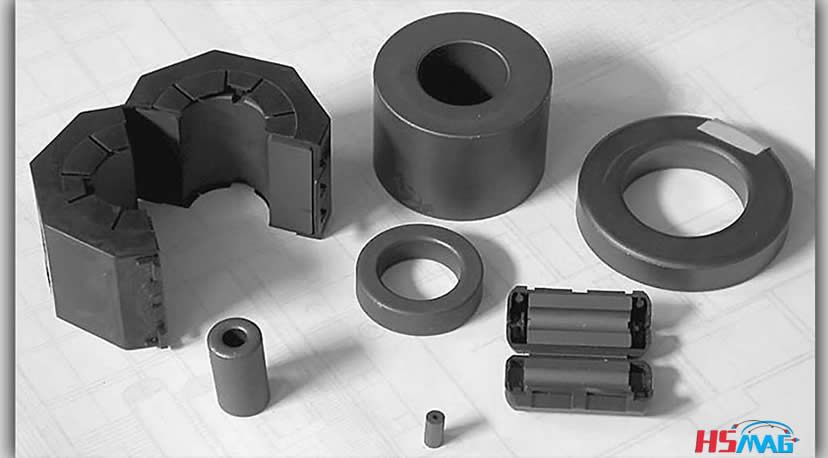 Ferrites are made of ceramic compounds and even act as insulators in transformers. They are composed of iron oxides integrated with zinc, nickel and manganese compounds. The ferrite core offers high resistance to high currents and also reduces low eddy current losses over many frequencies. Its high permeability makes it the ideal combination for use in high frequency transformers and adjustable inductors. In fact, the high magnetic permeability along with the low electrical conductivity of ferrites helps in the prevention of eddy currents. Ferrites are usually easy to mill, given their malleability. These factors, added with their low overall cost, make ferrites a natural choice for cores and beads.

Ferrite materials, out of which a transformer core is made, can be classified as soft ferrites and hard ferrites. Soft ferrites are able to handle reversals in their magnetic direction without losing a great deal of energy. The notable feature of these materials is that they resist any current in the core, making them more efficient. Hard ferrites hold on to their magnetisation very well and are very good at conducting magnetic flux. These are quite inexpensive and are even used in everyday applications such as refrigerator magnets.

Based on their size and frequencies of operation, ferrite cores have two broad application areas — in signal transformers, which are small in size and have higher frequencies, and in power transformers, which are larger and have lower frequencies. Cores can also be classified on the basis of their shape, such as toroidal cores, shell cores or cylindrical cores.
Ferrite cores are frequently used in inductors, sensors and in EMI/RFI filters. Because they can be manufactured out of different materials that offer varying properties, they are incredibly flexible in application and design.

Many ferrite cores—particularly those used in large-scale transformers—have accessories associated with them. Cooling systems, for instance, are often employed to ensure that transformers handling a great deal of power do not overheat, since that could damage them and be potentially dangerous to anyone standing nearby.

Ferrite core transformers are transformers that have their windings made from ferrites. The ferrite cores in transformers are chiefly composed of iron oxides, combined with nickel, zinc and manganese compounds – all of which are characterised by low coercivity and, therefore, are also known as soft ferrites.
Transformers are driven by the flux linkage between primary, secondary and tertiary windings. For maximum performance, the transformer provides one low reluctance magnetic path, usually in the core.

The correct choice of ferrite can only be confirmed by measurements in the EMC labs. It is generally not possible to calculate the dynamic impedance (system impedance) of a high frequency electronic circuit. This is dependent on many factors, which are hard to describe mathematically, especially in the RF range. Nevertheless, initial selection can be made with comparative measurements and a bit of experience.

Starting from this system impedance (ZA and ZB) and the required interference suppression, the ferrite impedance (ZF) can be calculated. According to the impedance of the ferrite and what it will be used for, the correct part can be chosen, e.g., a ferrite sleeve or an SMD ferrite.