Looking to add a magnetic sweeper to your shop or factory? Consider this.

According to Nerd Techy:

“Anywhere there’s been construction, you’re going to find loose nails, bolts, screws, and similar metal fragments. When there’s only a couple of pieces you have to worry about, and you know exactly where they are, you can often get away with sweeping them up like ordinary debris. But if you need to be certain that every bit of loose metal gets cleaned up, the right tool for the job is a magnet.

“Magnetic sweepers clean-up an area quicker and more reliably than would otherwise be possible. Only a magnet will pick up metal with such consistency that you can depend on it to clean up parts you didn’t even notice. If the area you’re trying to clear is a tiny six-by-six closet space, then you’re probably not going to need to involve magnetic sweepers. A little elbow grease and attention can clean up smaller spaces. But for combing through an entire house or an elongated driveway, and not miss a single screw, you want a magnetic sweeper. 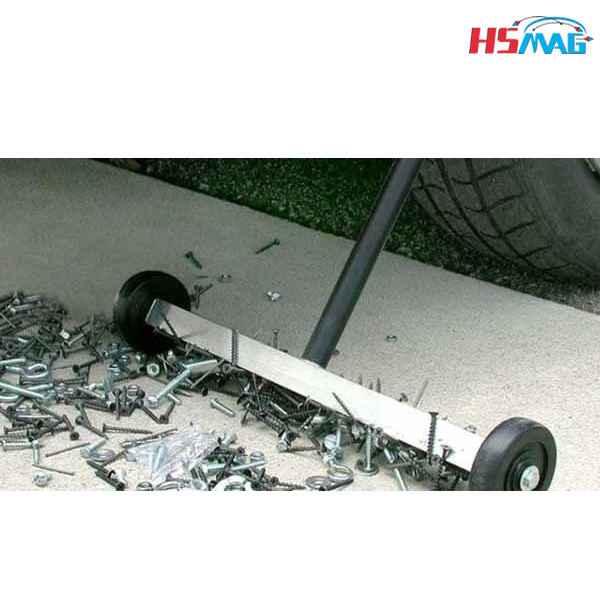 “Of course, you don’t have to be involved in construction to need a magnetic sweeper. Loose screws or nails in your driveway are like a time-bomb, waiting to destroy tires. Anywhere in your home or yard, it’s not hard to see why having pointy metal fragments on the ground isn’t going to end well. And depending on where you’re looking to sweep for metal, magnetic sweepers are available in a variety of builds to that are adaptable to most common applications.

“Unless you’re dealing with an industrial-level cleanup, you’re probably going to want a hand-sized sweeper. But the specific type of hand-sized magnetic sweeper you want to use will depend on the details of the type of cleanup.

“Push-type sweepers with a release are good for rapidly collecting screws and similar small items. They’re ideal for assembly workshops, warehouses, and other areas where bits of metal end up on the floor. Push-type magnetic sweepers without a release are similar, but can’t retract their magnetic force to drop debris. Consequently, you’ve got to clean them off with a shop towel between each use.

“Pushing a magnetic sweeper is similar to pushing a mop or broom. Anyone who’s done some mopping can tell you that the height of the handle is what ultimately what determines how your lower back feels after you’re done cleaning up. In the case of magnetic sweepers, which can be heavy compared to brooms or mops, it’s especially important to consider handle length.

“If the handle has a fixed length, you’ll want to know it’s long enough to be comfortably held by whoever is will be using it. Although they cost more, sweepers with telescoping handles are the smart choice for anyone who plans on using their sweeper for a significant duration of time. They’re not only easier to use, they’re much easier on the body. Choosing The Best Magnetic Sweepers For Picking Up Metal

“Unless you have tremendously specific applications in mind, you don’t need to get bogged down in metrics relating to the magnetic power of any particular sweeper. But you will want to know that the sweeper you’re selecting is powerful enough to pull-up metal from the places you want to sweep. Sweepers that are equipped to handle hardwood floors aren’t necessarily going to be well equipped to pull nails from tall grass.

“Additionally, if you’re dealing with any significant amount of metal, then ultimate carrying capacity of the sweeper’s magnet is something you’ll want to think about. For smaller cleanups, a capacity of at least one pound is enough to snatch-up loose debris. But for larger cleanups, at least ten pounds is necessary to help minimize trips to the trash. Choosing The Best Magnetic Sweepers For Picking Up Metal

“If you’re going to be putting in more than a couple hours of use with a magnetic sweeper, then the quality of the build is something to be concerned with. The tread of the wheels may or may not be equipped to handle slick or rugged terrain. The screw threads which attach the handle to the base might be easily worn down. The handle itself might be too heavy, or made of flimsy aluminum that feels like it’s ready to bend in your hand. Finding the right balance of quality materials and quality construction is something that only comes with plenty of hands-on time using magnetic sweepers.”

What are the different types of forklift magnetic sweeper?

What is a push magnetic sweeper?