Ce substitution level in Nd-Fe-B magnets has been significantly increased via the binary main phase (BMP) approach, i.e. sintering the mixture of Ce-free and Ce-containing RE 2 Fe 14 B (RE, rare earth) powders. REFe 2 phase that forms in the high Ce-containing Nd-Ce-Fe-B magnets has been considered to be harmful to magnetic performance due to its soft magnetism. In this work, we found that REFe 2 phase with lower melting point than the 2:14:1 phase plays positive role on optimizing the microstructure and retaining magnetic performance of the Nd-Ce-Fe-B BMP magnets. The wettability of 2:14:1 phase can be improved by sintering above the melting point of REFe 2 phase, which promotes densification of the magnet and the formation of continuous and smooth grain boundary (GB) phases. This contributes to the weakened short-range exchange coupling between adjacent grains, hence ensures superior magnetic performance of BMP magnets to the single main phase (SMP) ones with the same average composition.

Sintered magnets based on the compositions Pr 16Fe 76B 8 and Pr 16Fe 75.5B 8Zr 0.5 were produced using the hydrogen decrepitation process. Sintered magnets prepared under specific processing conditions from the zirconium-free alloy exhibited excellent remanence (1.22 T), intrinsic coercivity (1.22 T) and energy product (278 kJm -3). The squareness factor of magnets prepared from the Pr 16Fe 75.5B 8Zr 0.5 alloy was improved considerably (0.96). This investigation also shows the remarkable influence of zirconium addition on the intrinsic coercivity of these permanent magnets. 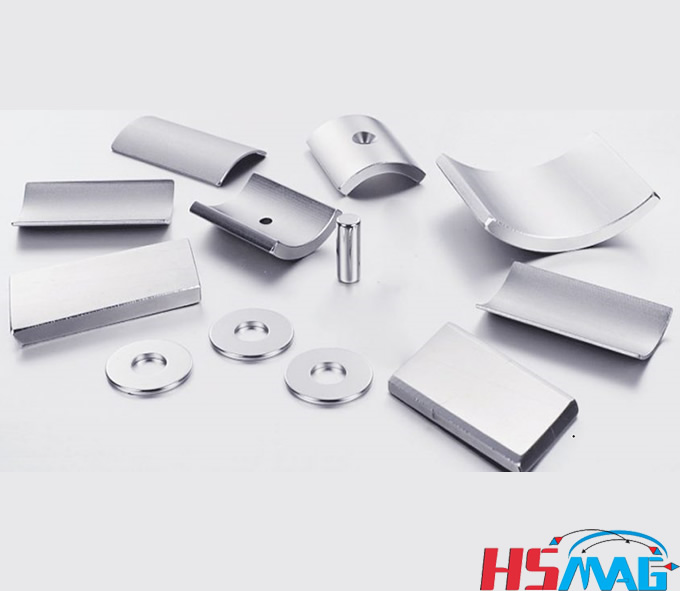 The magnetic powders for sintered NdFeB magnets have been prepared by using the strip casting (SC), hydrogen decrepitation (HD) and jet milling (JM) techniques. The effects of powder flowability and addition of a lubricant on the alignment degree and the hard magnetic properties of sintered magnets have been studied. The results show that the main factor affecting powder flowability is the aggregation of magnetic particles for powders in a loose state, but it is the friction between the powder particles for powders that are in a compact state. The addition of a lubricant with suitable dose can slightly prevent the congregating of powders, obviously decrease the friction between the powder particles, improve the powder flowability, and increase the alignment degree, remanence and energy product density of sintered magnets. Mixing a suitable dose of lubricant and adopting rubber isostatic pressing (RIP) with a pulse magnetic field, we have succeeded in producing the sintered NdFeB magnet with high hard magnetic properties of Br=14.57KG, jHc =14.43KOe, ( BH) max=51.3MGOe.