A magnetic lock without a keyhole claims to make it impossible for thieves to start, and can only be opened by attaching a matching, magnetic key to the lock body. Recently, this lock with a unique appearance and a tall name has aroused the curiosity of many consumers.

Peng Mei News randomly selected an online store to buy three sets of such locks. The actual measurement found that although the propaganda contents such as “no keyhole” and “magnetic unlocking” of the tested products are true, there is no uniqueness between the key and the lock. Three magnetic keys , any one can open three magnetic locks, and even use a magnet to adsorb the lock body can also achieve unlocking, there is a huge security risk. 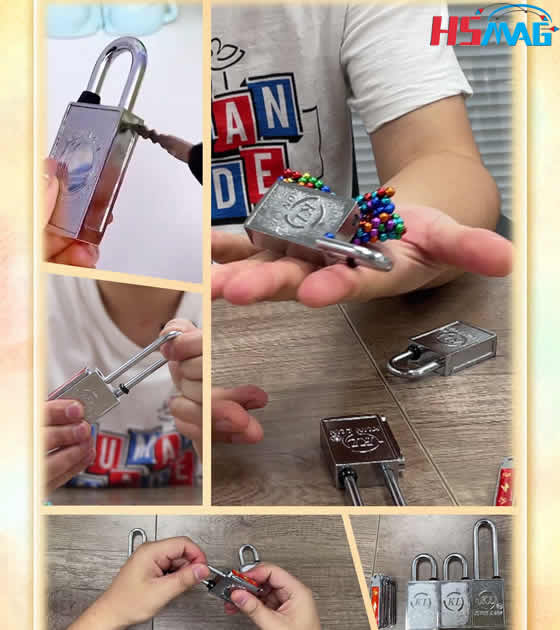 At present, the common magnetic locks on the market vary according to the number of keys and specifications, and the single price ranges from 28 to 49 yuan. In the product link, the merchant claimed that it is waterproof and rust-proof, without keyhole, anti-theft and anti-prying, and made a promise of “one key number for one customer”, and some merchants even claimed in the promotional video that their magnetic lock can cry thieves.

The Paper purchased three magnetic locks of different specifications in an online store and found that the outer packaging of the product was only a pure white carton, with no product and manufacturer information, no instruction manual, or even a certificate of conformity.

After testing, these three magnetic locks can be opened by any one of the three keys. There is no matching uniqueness between the lock and the key, and even a magnet can be used to open the lock easily.

The test found that the lock can also be unlocked with a magnetic buckyball adsorption lock body, which has a huge safety hazard.

Subsequently, Peng Mei News contacted the business concerned about the problems found in the actual measurement, but the other party did not admit that the key of the magnetic lock can be “opened more than once”, saying that its working principle is: “There are multiple magnetic columns in the key, It is placed in the position corresponding to the lock body, corresponding to multiple strikers in the lock body. The striker corresponds to different angles, and the lock cannot be unlocked if it cannot reach the specified angle. The position of the magnetic column of each lock is different, and the corresponding key must be used. to open.”

Regarding the problem that magnets can also be easily unlocked, the merchant did not explain much, only that “all magnetic locks are like this”. The surging news search found that in the comment area of the promotional video of the magnetic lock, many netizens pointed out that it has the above two problems. Many people said that the magnetic lock is an IQ tax product, and reminded not to buy it.