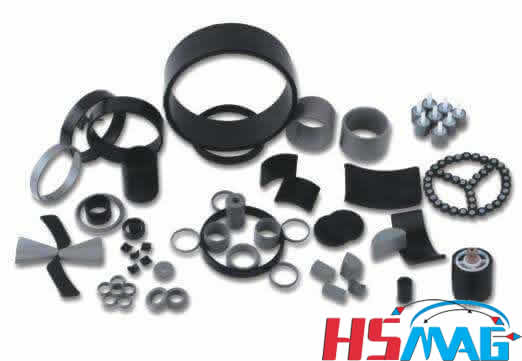 Of the many permanent magnet materials, four are still in common use: alnico, ferrite, samarium cobalt (SmCo) and neodymium iron boron (NdFeB). Alnico was invented and commercialized in the early 1940s. Ferrite magnets, also known as ceramic magnets, were first commercialized in 1952. SmCo5 was introduced in 1961 and an improved composition, based on Sm2Co17, was introduced in the early 1970s. The most recently developed material is NdFeB and was first available in 1984. Both the SmCo and NdFeB based materials belong to the family of rare earth magnets. Each magnet material has unique properties that make it more suitable for selected applications than other magnet options. Selection criteria include: magnetic strength, cost, constancy of magnetic output over temperature extremes, corrosion resistance, resistance to demagnetization, and mechanical properties such as density, physical strength or flexibility. Ferrite magnets, while providing less magnetic strength than rare earth magnets, cost far less. Therefore, they are still widely used wherever product cost is a major consideration over magnetic performance.

Bonded magnets are an important but often overlooked group of products that magnetic circuit and device designers should consider when choosing the optimum permanent magnet type for their specific application need. In their most basic form bonded magnets consist of two components; a hard magnetic powder and a non-magnetic polymer or rubber binder. The powder may be hard ferrite, NdFeB, SmCo, alnico, or mixtures of two or more magnetic powders known as hybrids. In all cases, the powder properties are optimized through processing and chemistry specifically aimed at utilization in a bonded magnet. The binder that holds the magnetic particles in place can produce either a flexible or rigid magnet. Typical binders for flexible magnets are nitrile rubber and vinyl. Binders for rigid magnets include nylon, PPS, polyester, Teflon and thermoset epoxies. The thermoplastic binders may be formed into sheet via a calendaring or extrusion process or formed into various complex shapes using injection molding. Compression bonding almost exclusively combines isotropic NdFeB powders with a thermoset epoxy binder using a uniaxial room temperature pressing process. A major advantage of bonded magnet processing is near net shape manufacturing requiring zero or minimal finishing operations compared to powder or cast metallurgical processes. In addition value added assemblies can be economically produced in a single operation.

Calendering is a rolling process for making continuous magnet sheets. It is used for flexible, rubber-based magnets. The granulated compound of ferrite powder and elastomer is fed in the top and through a series of heated rolls. The rolls apply high compressive loads and by applying tension to the strip as it exits the rollers, a continuous roll of several hundred feet can be formed. In some cases mechanical orientation can be achieved due to the applied pressure and utilizing the plate-like shape of the ferrite particles. Typical sheet thicknesses are from 0.012 to 0.250 in. Hard magnetic powders are normally ferrite though some NdFeB and ferrite/NdFeB hybrids are available.

Injection molding is the process of injecting a molten, highly filled thermoplastic compound into mold cavities where it is allowed to cool and solidify. Ferrite and NdFeB powders are commonly used as the magnetic powder in the compound. Typically multi-cavity tooling is used to achieve high volume output and productivity. Complex shaped magnets can be formed by this process together with multi-component assemblies by insert and over molding techniques. Typical magnetic powder loadings are around 65 volume percent.

The raw material used in the extrusion process is similar to the compound used in calendering. The extrusion screw works against a heated barrel to push the compound through a heated die at high pressure. The resulting strip of material is collected, either on a spool, cut sheet is stacked, or strip is cut into pieces of specific length. The cross-section profile of the strip must remain the same along the length of the extrusion.

It should be noted that since both ferrites and NdFeB powders are very abrasive special wear resistant coatings are used in both injection molding and extrusion tooling.

The fourth manufacturing process is compression bonding. Optimum performance is obtained by processing the NdFeB powder through a powder refinement step and liquid encapsulating process to coat each particle with a thin film of thermoset epoxy and hardener and other additives e.g. die wall lubricant. The encapsulated powder is fed into a press cavity and compacted under pressures of about 6 tonnes/cm2. The compacted magnet is then cured at temperatures of about 150 to 175°C. One major advantage of compression bonding is that the magnetic loading can be as high as 85 percent by volume, resulting in higher flux densities than calendered, injection molded and extruded magnets. Dimensional tolerances are equivalent to injection molded products, making secondary operations generally unnecessary. The development of compression bonded NdFeB with maximum energy products of 10 MGOe and higher along with net shape capability of arcs and cylinder shapes have found numerous applications in brushless DC motors. Also the capability to form long axial length, thin wall cylinders combined with the relative ease of multipole magnetizing has led to compression bonded NdFeB magnets being used in high volume HDD spindle motors as well as other motor applications.

MagApp_Fig1A major advantage of isotropic NdFeB magnetic powders is that no aligning field is required during forming process (injection molding or compression bonding), simplifying fabrication and since there is no residual magnetization to attract ferromagnetic particles to the magnets, enhancing cleanliness during subsequent handling and assembly operations.

Important Characteristics of Commercially Important Permanent Magnets
In my opinion, Maximum Energy Product (BHmax) is often an overemphasized and misunderstood parameter of magnetic performance when it comes to selecting the best magnet material for an application. For a magnet of a given volume, the attainable energy in the air gap of a magnetic circuit is proportional to the BHmax. It is a function of the maximum product of flux density B and the corresponding field strength H at a point along the second quadrant demagnetization curve and is measured in units of kJ/m3 (Kilojoule per cubic meter) or MGOe (MegaGaussOersted) as shown in Figure 1.

Many other characteristic determine the ultimate commercial success of a permanent magnet material; some are listed in Figure 2.

Ultimately the specific application conditions during the end users operation of the device determine the optimum magnetic material choice. It is also revealing to look at the historical development and commercial acceptance of permanent magnet materials as illustrated in Figure 3.

This shows the year of introduction of the permanent magnet material based on the maximum energy product, BHmax. As can be seen most of the important developments occurred in the 20th Century. However, one of the most significant materials introduced in the late 1950’s by Phillips was based on Strontium or Barium Hexaferrite. The hard ferrites exhibit significantly lower BHmax than the Alnico grades available at the time. Clearly, raw material economics played a significant role in the market acceptance of hard ferrites but even today it is the most widely used permanent magnet material on a weight basis representing almost 90 percent of the global production of magnets by weight. Another example is the growth and market penetration of isotropic bonded, both injection and compression, NdFeB. While the raw materials costs are the same as fully dense anisotropic NdFeB magnets, isotropic bonded NdFeB magnets at approximately 25 percent of the BHmax of their sintered cousins have establish a Global market presence of around $750 million. It’s also worth noting that higher BHmax (say above the 50MGOe available with sintered NdFeB) leads to practical considerations for manufacturers and device designers. Higher BHmax leads to increased flux densities in the circuit, which may require soft magnetic components with larger cross sectional areas to prevent saturation. Alternatively higher BHmax level while enabling further miniaturization of devices lead to manufacturing challenges to cost effectively produce magnets with thinner magnetic axes.

Since the introduction of hard ferrites magnetic device designers have become accustomed to working with permanent magnet materials that exhibit straight line 2nd quadrant demagnetization characteristics where the BHmax point typically occurs at approximately 0.5 of remenance as shown in Figure 1. The previous generation of Alnico permanent magnets exhibited relatively low coercivity and the BHmax occurred at very high load lines/permeance coefficients with non-linear demagnetization behavior. This design paradigm became further ingrained with the introduction of high coercivity rare earth magnet materials. The position of the BHmax point on the demagnetization line has a dramatic influence on the geometry of the magnet. Simply put low coercivity materials have a long magnetic axis (large L/D ratio) while high coercivity materials have short magnetic axes (small L/D ratio).

In addition the expiration of Hitachi Metalâ€™s US compositional patent 5,645,651 in July 2014 has opened up the market for additional suppliers of isotropic NdFeB powders for bonded magnets. While as of today this has not an impact on market pricing it is expected to drive further innovation in the grades and performance of powders available to bonded magnet manufacturers and their customers.

Future Developments
It is interesting to note that while anisotropic powders based on both NdFeB and SmFeN alloys have been available for over a decade they appear to have only had a minor impact on bonded magnet applications. One significant drawback of both types of powder is their thermal stability and low maximum operating temperature capabilities. Also that requirement to apply an orienting field during the forming operation adds to the complexity of tooling and increases the magnet processing costs.

Volume Fraction of Magnetic Phase in the Magnet: Typically measured by the density of the magnet. Todayâ€™s approach is one of brute force i.e. increasing the pressing pressure which requires special press construction and tooling materials. However, work is underway to improve the compressibility of powders and therefore achieve high densities with moderate pressing pressures. It is also important to improve the flowabilty of powders to enable even thinner wall die cavities to be filled uniformly during the pressing operation.
Magnetic Powder Remanence (Br): The goal is to increase isotropic Br of powders while maintaining sufficient coercivity (Hci) to have linear demagnetization characteristic at the application temperature.

At a recent Critical Materials Institute workshop held at Brown University I was asked to provide high level targets for the next generation of bonded magnets material to help guide the CMIâ€™s research efforts. The targets are as follows:

Another exciting processing technology that has the potential to revolutionize the production of bonded magnets is 3D printing or additive manufacturing. MAI has teamed with researchers at Oak Ridge National Laboratories (ORNL). The technical objective of the proposal is to fabricate net shape isotropic NdFeB bonded magnets utilizing additive manufacturing technologies at ORNL. The goal is to form complex shapes of both thermoplastic and thermoset bonded magnets without expensive tooling and minimal wasted material.

Conclusion
Bonded magnets are a diverse and versatile contributor to the portfolio of permanent magnet materials available to device designers. They offer many unique advantages in both product form and value added assembly capabilities. They find application in a wide range of devices and markets. Future innovation of both processing and materials will provided more benefits to designers and stimulate even higher growth and market penetration.