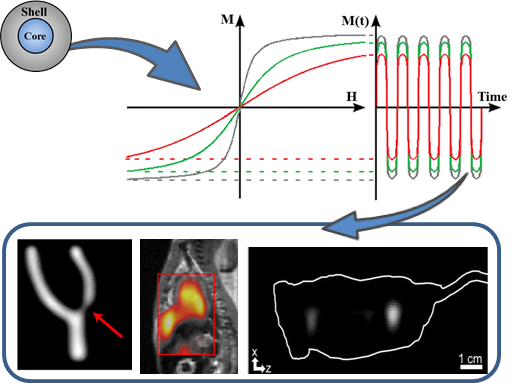 A wide variety of applications have been envisaged for this class of particles which include:

Magnetic nanoparticles are used in an experimental cancer treatment called magnetic hyperthermia in which the fact that nanoparticles heat when they are placed in an alternative magnetic field is used.

Affinity ligands such as epidermal growth factor (EGF), folic acid, aptamers, lectins etc. can be attached to the magnetic nanoparticle surface with the use of various chemistries. This enables targeting of magnetic nanoparticles to specific tissues or cells. This strategy is used in cancer research to target and treat tumors in combination with magnetic hyperthermia or nanoparticle-delivered cancer drugs.

Another potential treatment of cancer includes attaching magnetic nanoparticles to free-floating cancer cells, allowing them to be captured and carried out of the body. The treatment has been tested in the laboratory on mice and will be looked at in survival studies.

“Researchers from Harvard Medical School and Massachusetts General Hospital have developed a magnetic nanoparticle-based MRI technique for predicting whether—and when—subjects with a genetic predisposition for diabetes will develop the disease. While done initially in mice, preliminary data show that the platform can be used in people as well, so far to distinguish patients that do or do not have pancreas inflammation. “This research is about predicting Type-1 diabetes, and using that predictive power to figure out what is different between those who get it and those who don’t get it,” said Diane Mathis, Morton Grove-Rasmussen Professor of Immunohematology in the Department of Microbiology and Immunobiology and, along with Christophe Benoist, Morton Grove-Rasmussen Professor of Immunohematology, co-senior author of the paper. The results were published online in Nature Immunology on Feb. 26, 2012. According to first author Wenxian Fu, a research fellow in the Mathis-Benoist lab, the group was surprised that the diagnostic window—from six to 10 weeks of age— was so early, and so brief. This shows that the progression of the disease, at least in this animal model, is determined very early in life, and that diabetes does not require an additional trigger such as a secondary infection or environmental stress …”

Magnetic immunoassay (MIA) is a novel type of diagnostic immunoassay utilizing magnetic nanobeads as labels in lieu of conventional, enzymes, radioisotopes or fluorescent moieties. This assay involves the specific binding of an antibody to its antigen, where a magnetic label is conjugated to one element of the pair. The presence of magnetic nanobeads is then detected by a magnetic reader (magnetometer) which measures the magnetic field change induced by the beads. The signal measured by the magnetometer is proportional to the analyte (virus, toxin, bacteria, cardiac marker,etc.) quantity in the initial sample.

Thanks to the easy separation by applying a magnetic field and the very large surface to volume ratio, magnetic nanoparticles have a good potential for treatment of contaminated water. In this method, attachment of EDTA-like chelators to carbon coated metal nanomagnets results in a magnetic reagent for the rapid removal of heavy metals from solutions or contaminated water by three orders of magnitude to concentrations as low as micrograms per Litre. Magnetic nanobeads or nanoparticle clusters composed of FDA-approved oxide superparamagnetic nanoparticles (e.g. maghemite, magnetite) hold much potential for waste water treatment since they express excellent biocompatibility which concerning the environmental impacts of the material is an advantage compared to metallic nanoparticles.

Magnetic nanoparticles are being used or have the potential use as a catalyst or catalyst supports. In chemistry, a catalyst support is the material, usually a solid with a high surface area, to which a catalyst is affixed. The reactivity of heterogeneous catalysts occurs at the surface atoms. Consequently, great effort is made to maximize the surface area of a catalyst by distributing it over the support. The support may be inert or participate in the catalytic reactions. Typical supports include various kinds of carbon, alumina, and silica.

There are many applications for iron-oxide based nanoparticles in concert with magnetic resonance imaging. Magnetic CoPt nanoparticles are being used as an MRI contrast agent for transplanted neural stem cell detection.

Research is going into the use of using MNPs for magnetic recording media. The most promising candidate for high-density storage is the face-centered tetragonal phase FePt alloy. Grain sizes can be as small as 3 nanometers. If it’s possible to modify the MNPs at this small scale, the information density that can be achieved with this media could easily surpass 1 Terabyte per square inch.

Magnetic nanoparticles can be used for a variety of genetics applications. One application is the isolation of mRNA. This can be done quickly – usually within 15 minutes. In this particular application, the magnetic bead is attached to a poly T tail. When mixed with mRNA, the poly A tail of the mRNA will attach to the bead’s poly T tail and the isolation takes place simply by placing a magnet on the side of the tube and pouring out the liquid. Magnetic beads have also been used in plasmid assembly. Rapid genetic circuit construction has been achieved by the sequential addition of genes onto a growing genetic chain, using nanobeads as an anchor. This method has been shown to be much faster than previous methods, taking less than an hour to create functional multi-gene constructs in vitro.