GENEVA (AP) — A $2 billion cosmic ray detector on the International Space Station has found the footprint of something that could be dark matter, the mysterious substance that is believed to hold the cosmos together but has never been directly observed, scientists say.

But the first results from the Alpha Magnetic Spectrometer, known by its acronym AMS, are almost as enigmatic as dark matter itself. They show evidence of new physics phenomena that could be the strange and unknown dark matter or could be energy that originates from pulsars, scientists at the European particle physics laboratory near Geneva announced Wednesday.

The results from the detector are significant, because dark matter is thought to make up about a quarter of all the matter in the universe. Unraveling the mystery of dark matter could help scientists better understand the composition of our universe and, more particularly, what holds galaxies together.

Nobel-winning physicist Samuel Ting, who leads the team, told colleagues at the European Organization for Nuclear Research, known as CERN, that he expects a more conclusive answer within months about this “unexpected new phenomena.” 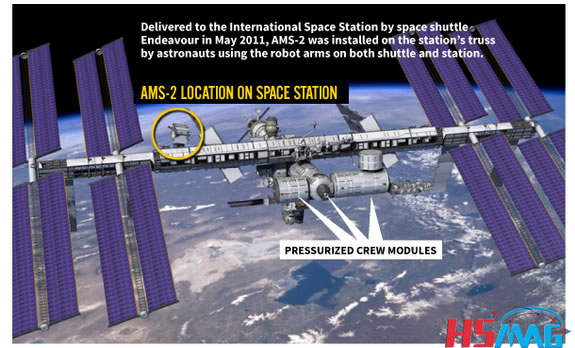 The 7-ton detector, which was sent into space two years ago and has a 3-foot (0.91-meter) magnet ring at its core, is transmitting the data to CERN on the Swiss-French border, where it is being analyzed.

Scientists using a space-based device for analyzing cosmic rays say that they may have seen evidence of mysterious dark matter particles annihilating each other. Dark matter emits no light and hasn’t been seen previously by instruments, yet it seems to exist in a vastly larger amount than regular matter in the universe.

Unlike instruments on the ground, the Earth-orbiting Alpha Magnetic Spectrometer-2 investigates cosmic particles that do not survive the passage through the Earth’s atmosphere. AMS-2 is the largest and most powerful such instrument ever put in space.

AMS-2 uses a large magnet to create a magnetic field that will bend the path of cosmic particles. Eight detector instruments provide information on the particles as they pass through, potentially detecting antimatter or dark matter in the mix.

Delivered to the International Space Station by space shuttle Endeavour in 2011, AMS-2 was installed on the station’s truss by astronauts using the robot arms on both shuttle and station.

A positron is the antimatter counterpart to the electron. Antimatter and matter annihilate each other on contact, releasing enormous amounts of energy.

AMS-2 measured the positron fraction, or the ratio of positrons to the combined flux of electrons and positrons.