1.Neodymium Magnets Permanent NdFeB
Neodymium magnet is a sort of alloy called Nd2Fe14B or NdFeB that formed by Nd,Fe,B,and some transform material like Dy, Ga and Pr. In order to meet different industrialor domestic needs,various of magnet formulas and manufacturing methods have been discovered and applied in past 30 years. 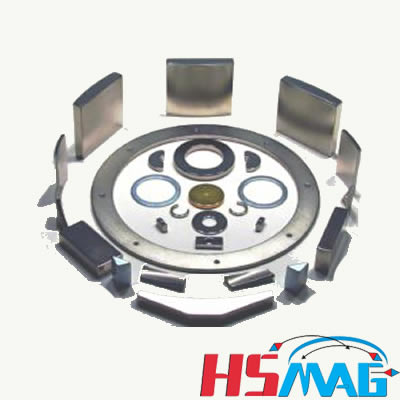 The super magnetism of Sintered NdFeB ( N52 is up to 52MGOE ) and moderate price ( half of SmCo magnets ) hence NdFeB magnets have became the best commercialmagnets and widely applied in civil , industrial ,telecommunication and medical areas.Due to the particularity of manufacturing technique, bonded isotropic NdFeB can easily mound into different shapes, the BHmax is up to 10 MGOE, only 20% of sintered type.The magnetism of NdFeB magnet is 40%-70% higher than SmCo magnets, while price is half cheaper,When working temperature is over 220℃ SmCo is better than NdFeB on magnetic stablity and temperature coefficiency.NdFeB magnets are usually axial direction magnetized or dia direction magnetized in magnetizing envioronment from 1 mgoe -100 mgoe it is pending on customers` actual requirement.

2.Samarium Colablt Magnets SmCo5 Sm2Co17
Samarium Cobalt magnets are divided into 2 sort, SmCo5 & Sm2Co17, magnetization from axial direction or dia direction are both available,compared with SmCo5,
Sm2Co17 magnets have reduced expensive samarium and have rose the magnetic properties.Working temperature of SmCo magnets is up to 350℃.In high temperature situations SmCo magnets are better than NdFeB magnets on magnetism stability and BH use ratio hence they have widely been applied as AC servo motors, operators, industrial motors,sensor, and also applied in aerospace and military areas.

4.AlNiCo Magnet Steel ALNICO5 AlNICO8
Alnico magnets are formed by Aluminium, Nickel and Cobalt,It also contains Iron,Copper, Titanium,Component constitution will Influence magnetismproperties, Alnico magnets are produced by sintered or casted technique, The surfaces need machining grounding to a smoother surface have a brightly metallic looking. Casting AlNiCo magnets have offered more flexibility for variety sizes and shapes, while Sintered AlNiCo magnets have smaller tolorances but their machanical properties are not good.
The most commonly used Alnico is Alnico5. There are 4 sort of cast Alnico5 plus a single sort of sintered Alnico5 ( sintered Alnico and cast Alnico have slightly different magnetism and mechanical performance). Among the permanent magnetic materials, AlNiCo have the best reversible temperature coefficient, the highest working
temperature up to 500 ℃, it has the hardest and toughest strongness.
Most Alnico magnet grades are anisotropic ( axial / vertical direction add magnetization ).others are isotropic(horizontal direction magnetized and have many poles on one magnet) they are weaker on magnetism but offer more options on design and properties.

When to chose permanent magnets for your application?

If you need help determining the best choice for your application, whether it be Neodymium Iron Boron Magnets, Ferrite Magnets, AlNiCo Magnets or Samarium Cobalt Magnets, we would be glad to assist you. Simply give us a call at 86-574-27667267 or Email:info@hsmagnets.com.